With the magnificent “High Tension” and his exhilarating remake of “The Hills Have Eyes,” director Alexandre Aja positioned himself as a genre innovator with unusually lucid ideas on how to return some fright to horror cinema. “Mirrors” is Aja stepping up to the big leagues, taking on his largest budget to date and working with an authentic Hollywood star. It’s a tricky position for Aja to find himself in, and the obscene pressure has blurred his once pristine vision for scares.

Reeling from an accidental shooting during his time as a NYPD detective, Ben Carson (Kiefer Sutherland, putting forth minimal effort) has drowned his guilt in booze and rage. Trying to clean up his act and win his family (including Amy Smart and Paula Patton, fighting her cleavage for screentime) back, Ben takes a job as a security officer guarding the spooky ruins of a department store that suffered a massive fire. During his rounds, Ben spies strange visions in the massive mirrors that decorate the hallways, images that forecast gruesome death. Attempting to investigate the history of the store and its past tragedy, Ben finds he’s brought the visions home to terrorize his loved ones, forcing him to fight back against the ghostly wrath of the mysterious reflections.

A remake of a 2003 Korean production, “Mirrors,” like all of these reheated Asian imports, fails to sniff out how to accurately translate supernatural scares for American audiences. What’s here really isn’t a horror film but a mystery, with Ben spending more time piecing clues together than feeling the heat from demonic forces. Aja seems at a loss how to process the material, perhaps envisioning “Mirrors” as his transition piece out of the scare zone, yet he doesn’t possess the dramatic storytelling tools necessary to keep Ben’s personal crisis convincing. In short: “Mirrors” is pretty damn boring.

The picture is often slapdash in execution as well. The dialogue consists of painfully awkward expositional conversations, not pulse-quickening exchanges of worry; every single time a character opens their mouth, it’s only to restate the obvious or patch holes in the script. Instead of plunging into the glassy unknown right away, some time with the leads would’ve been appropriate, instead of obvious character positioning for future torment. Again, Aja appears bewildered on how this film should ultimately stitch together, caught between the chills he knows like the back of his hand and the more leashed menace he’s unfamiliar with.

When “Mirrors” slips into terror mode, it mucks with the story even further. The bloodletting doesn’t feel organic to the plot, showing up in a vague studio-mandated fashion over an instinctive need to creep out the room. “Mirrors” confounds at times as well, with Ben diving headfirst into the mystery of the department store without blinking an eye, even after witnessing events that would make the Ghostbusters wet their pants. A supporting character’s literal jaw-ripping death doesn’t seem to rattle the narrative either, with Ben and the local cops carrying on as though nothing occurred, when clearly it has to be the most heinous crime imaginable, even by loose NYPD standards.

If you sit down with “Mirrors” and end up invested in Ben’s lukewarm detective work, consider yourself the most patient filmgoer around. With Aja slathering on the cheap boo scares, overseeing rancid performances, barely investing in his screenplay, and showing questionable gorehound taste in violent imagery, “Mirrors” eventually reflects absolute tedium, not appealing supernatural fury. 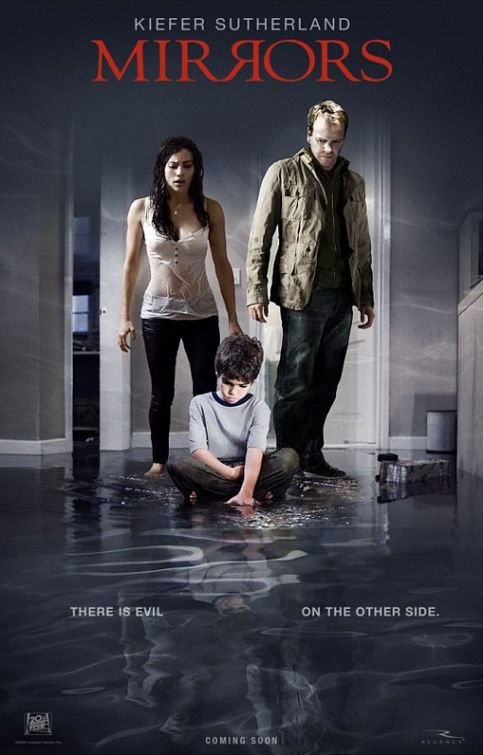 I completely agree with your review. Boring and quite stupid movie - and I can't believe that Alex "Haute Tension" Aja made that POS. He even said that he thinks it's his scariest movie! Can you say "delusional"? :)

Love your reviews, keep up the good work!