Blu-ray Review - Battle Beyond the Stars 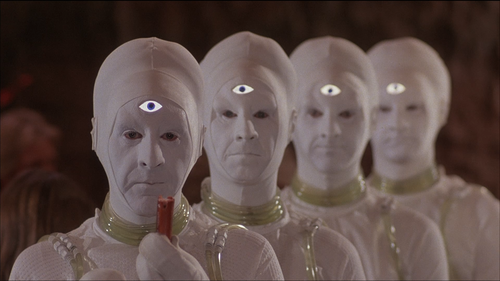 Never one to leave a Hollywood trend alone, producer Roger Corman decided to assemble his own “Star Wars” space opera cash machine with “Battle Beyond the Stars,” a low-budget (of course) take on Lucasian matinee mayhem. The results are predictably formulaic, but never cynical, with Corman and his team of filmmakers creating a sincere, engaging sci-fi spectacle that makes a lovely ruckus, though it lacks a cracking pace that helped shape “Star Wars” into a legend. 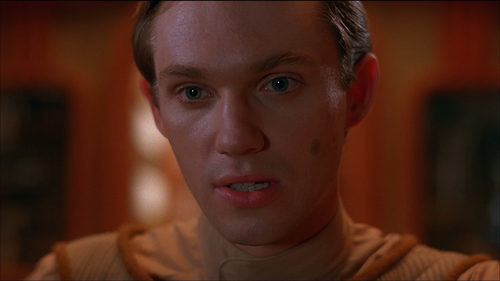 Directed by Jimmy T. Murakami and written by John Sayles, this 1980 release has been famously described as “The Seven Samurai” in space, with Corman paying tribute to a time-tested formula for screen heroism, permitting the production an opportunity to erect a colorful display of spaceships and aliens to help feel out the “Star Wars” atmosphere. It’s wholly derivative (“Battlestar Galactica,” “Star Trek,” and “Superman” are peppered into the mix as well), but consistent  in its confidence, with Murakami finding a jolly tone of discovery to exploit as the story marches around the galaxy, unearthing all types of heroes and villains.

Featuring a rousing score from James Horner (sounding like a blend of “Krull” and “Star Trek 2”) and extensive design work from a young James Cameron, “Battle Beyond the Stars” holds an impressive collection of talent, deploying gifted artists to fashion a blockbuster with spare change. While Corman’s most expensive production at the time, the picture still holds to spare B-movie theatrics, deploying repetitive model work and imperfect make-up to bring the screen to life. Doing much with very little, the production deserves enormous credit for the creation of worlds and ships, infusing the seven warriors with crisp identities (you’ll recognize Cowboy’s ship as the one with the Confederate flag on it, Shad’s ride has metal breasts) and divergent appearances to help generate a spirited tone of collaboration. Sayles juggles the characters superbly, permitting everyone their opportunity to shine and emote, while Murakami bends over backwards to seamlessly patch together numerous special effects, happy to distract the viewer with chase sequences and extended invasion showdowns, also using Danning’s sex bomb appeal to keep attention away from the budgetary limitations. Why pay for explosions when there’s spandex? 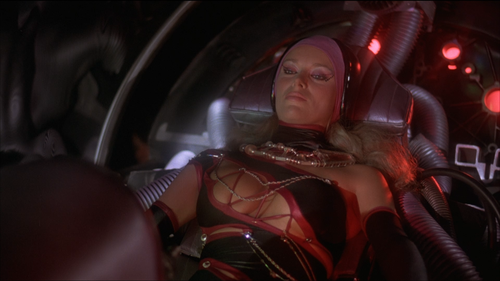 Sayles does have the unfortunate task of dreaming up names for everything on display, leaving the film to strain a little too hard to achieve the breathlessness of George Lucas’s screenwriting. Shad is a strange hero name, but with characters like Gelt, Mol, and Cowboy, the awkwardness fades away after a few reels. There’s also an issue of padding, establishing a romantic connection of sorts between Shad and Nanelia, who share a curiosity about sex without the organic development of mutual interest found in similar epics. Though intended to be a chaste pairing of virginal rubes, Thomas and Fluegel share little chemistry, with their coupling used to break up the action, especially in the laser-heavy third act. 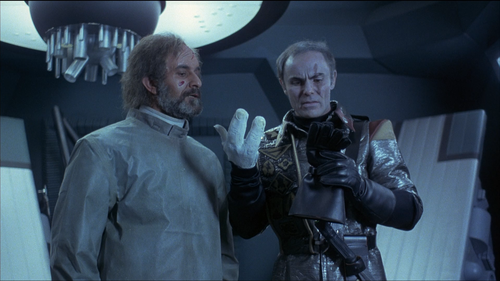 The AVC encoded image (1.85:1 aspect ratio) presentation is perhaps the best the film has ever looked outside of its original theatrical presentation. Clarity is wonderful here, with a fresh look at the visual achievements of the movie, permitting the viewer an opportunity to study the model and make-up work, which is revealed in full, for better or worse. Colors are rich and comfortably separated, with clear differences in alien skin and planetary atmosphere. Shadow detail is generally sturdy, with only a few mild moments of crush. Grain is on the inconsistent side, while print damage is evident, though nothing is distracting. It’s expectedly rough around the edges, but the picture makes an impressive debut on BD.

The 5.1 DTS-HD sound mix is quite robust for a 31-year-old motion picture, finding an interesting sense of expanse to claustrophobic events. Dialogue is clean and inviting, with satisfactory separation on the various voices, retaining the verbal power of certain characters. Scoring is pronounced and full, maintaining a constant presence in the surrounds to help support the fantasy. Atmospherics are generous, with various sci-fi particulars and space flight staying alert without overwhelming the action, revealing some directional heft. Low-end is spare but satisfactory. A 2.0 mix is also included. 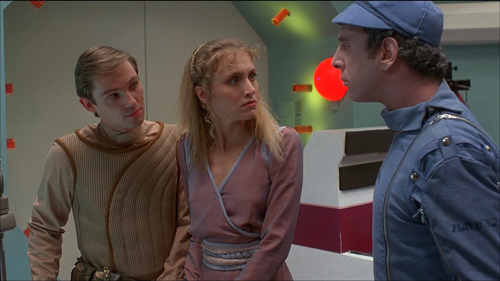 The feature-length audio commentary with producer Roger Corman and writer John Sayles is extremely conversational, featuring two men happily recalling their efforts to bring the picture to life in a hurry. There are numerous anecdotes to share, with Corman focusing on the overall creative achievement, exploring how the budget was put together and how he pulled a crew together, taking great delight in launching James Cameron’s career. Sayles takes a more nuts and bolts approach, breaking down the filmmaking essentials, while exploring his own influences and preparation. The track is terrific, truly dissecting screen events and the frantic Corman experience.

A second commentary from production manager Gale Anne Hurd is a dry affair. Perhaps too dry. Hurd holds a unique perspective on the production (not to mention being one of Cameron’s ex-wives), but her track is more tentative and unprepared than engaging, with only a moderate amount of information shared, with stretches of silence growing longer as the film plays out. The patient will find Hurd’s tales of BTS hustle interesting, but those hoping for a more intimate explanation of backstage events will likely leave disappointed.

“The Man Who Would Be Shad” (15:21) makes needed time with the extraordinarily charismatic Richard Thomas, who exuberantly details his experiences making the film, unafraid to discuss his career challenges at the time of the shoot, his comfort around co-stars, and the challenge of keeping Danning’s nipples inside her revealing costumes. It’s an amusing, enlightening conversation.

“Space Opera on a Shoestring” (33:23) focuses on the technical struggles of the film, spotlighting honest interviews with various crew members who openly share their experience battling Corman and each other to make the best picture possible without the benefit of time or money. There’s a jovial tone here, but the stories reveal numerous frustrations and some moments of conflict, with the men exposing the daily struggle of low-budget moviemaking. Again, more magnificent stories are shared, enriched here by a real sense of pride.

A Still Gallery is provided, offering 37 pictures from production (including a few snaps that seem to be from another film entirely).

A Poster Gallery serves in 19 stills from the marketing effort.

And a Theatrical Trailer and Radio Spot are included. 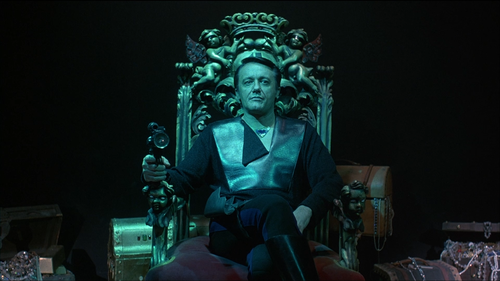 “Battle Beyond the Stars” grows monotonous during its volatile conclusion. There are only so many intense close-ups of actor faking space flight one can take before it all starts to lose impact. The picture limps to a finale, but it’s not a rough landing, sustaining a good vs. evil focus that’s appealing, despite a few dramatic barriers. Corman wanted a “Star Wars” and he got one with “Battle Beyond the Stars.” It’s a knockoff, but one executed with more flair than expected, assembling a few interesting thrills of its own. 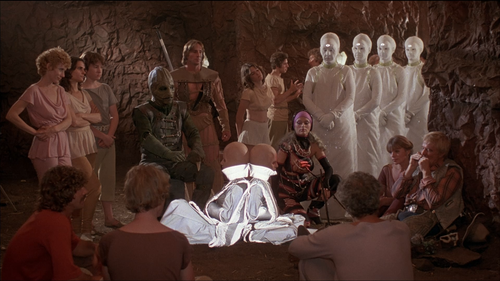 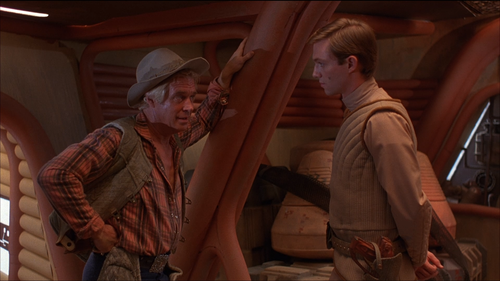 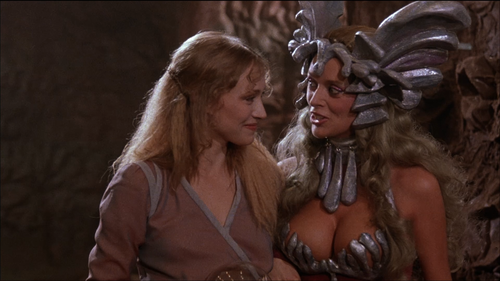 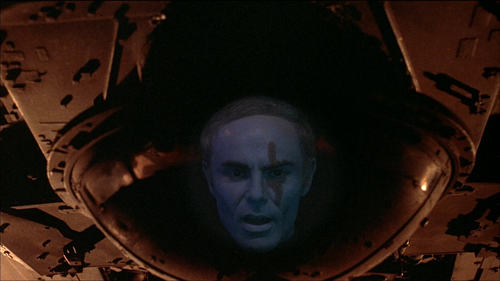 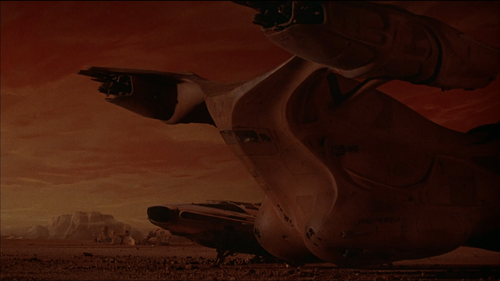 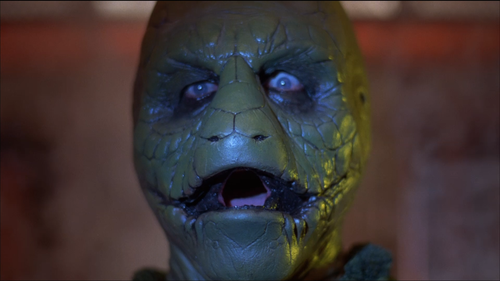 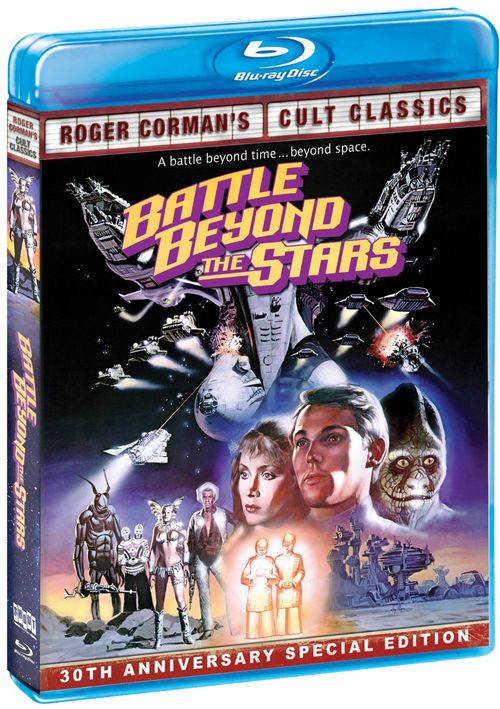