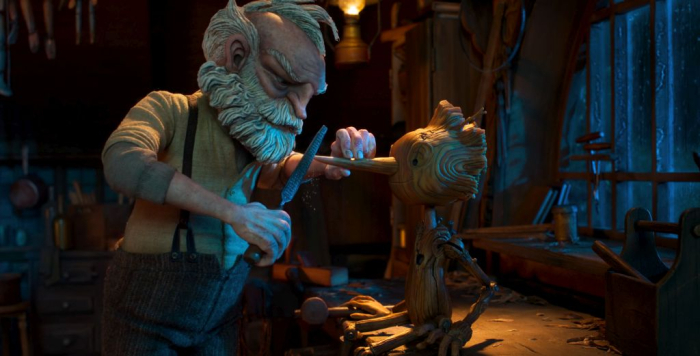 There was once a time when one had to wait years between adaptations of “Pinocchio,” with the author Carlo Collodi’s 1883 book a popular choice for producers looking to do something with world-famous public domain material. This year, mere months separate the releases, with Disney taking another swing at the concept with a September release directed by Robert Zemeckis and starring Tom Hanks. It was more of a remake, giving the company’s 1940 animated endeavor a live-action update, but co-writer/co-director Guillermo del Toro is not interested in making the same movie as everyone else. He’s gone back to the darkness of Collodi’s imagination, reworking a story of magic and curiosity into a stop-motion animated study of pre-WWII Italy, with the eponymous wooden puppet facing the rise of fascism while also handling his dream of becoming a real boy. I’ve seen many takes on “Pinocchio” over the years, but this is the first version to feature a cameo by Mussolini, with del Toro, co-director Mark Gustafson, and co-writer Patrick McHale putting in the effort to make this version of “Pinocchio” their own. Read the rest at Blu-ray.com