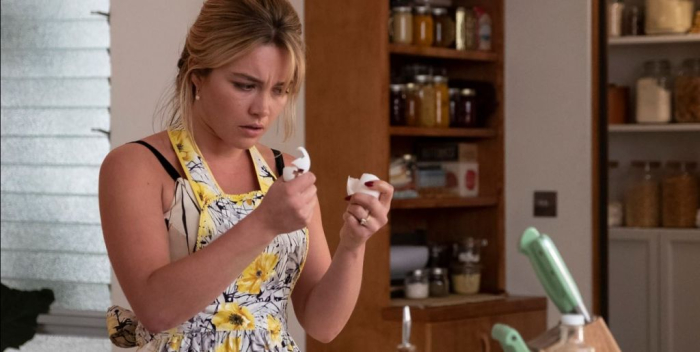 2019’s “Booksmart” was special, emerging from a murky sea of lame teen comedy films, trying to offer a fresh take on adolescent high jinks from a female perspective. It was the directorial debut for actress Olivia Wilde, and she managed to balance tone and performances, working with co-screenwriter Katie Silberman to offer something oddball and somewhat loveable, capturing a volatile high school energy. It was a pleasantly surprising offering from Wilde, and she returns with an intentionally cryptic endeavor in “Don’t Worry Darling,” reteaming with Silberman for a much different study of power and paranoia. While “Booksmart” carried a casual energy, “Don’t Worry Darling” is attempting to be a suffocating viewing experience, hammering viewers with an intimidating soundscape and cranked-up acting. Wilde’s trying to master a mystery with her second feature, but she’s mostly making noise with this aggressive picture, which is too derivative of other movies to truly shock. And while its messages on the state of gender relations are valid, the effort’s violent execution and painful overlength erodes any lasting appreciation for its themes. Read the rest at Blu-ray.com