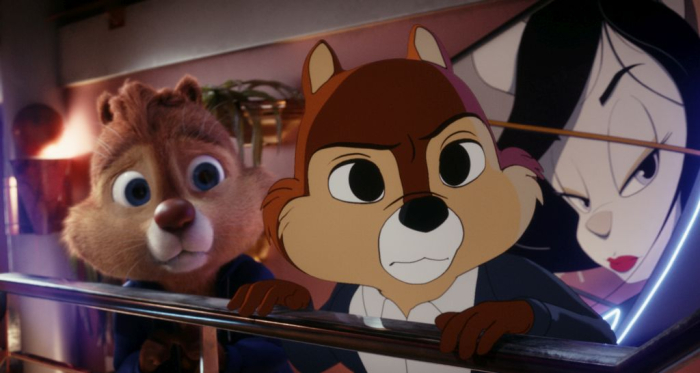 While many attempts to put a sequel together were made over the years, a true follow-up to 1988’s “Who Framed Roger Rabbit?” never found its way into production, robbing audiences of a chance to return to a world where pieces of animation history and detective fiction fit together with a comedic tilt. Writers Dan Gregor and Doug Mand seem to have this feisty spirit in mind for “Chip ‘n Dale: Rescue Rangers,” which offers an update of the 1989 animated series for ardent fans who’ve missed the crime-solving chipmunks, but also gives the whole thing a self-referential makeover that weaves the beloved characters into a world of cartoon heroes, villains, and monstrosities. Director Akvia Schaffer (“Hot Rod,” “Popstar: Never Stop Never Stopping”) isn’t interested in reviving the show’s sense of playfulness, going hipper and louder with this mosaic of animated styles, brands, and history, hoping to huff some “Roger Rabbit” fumes while reintroducing the “Rescue Rangers” concept to a younger audience…in a film that’s not really for kids. Read the rest at Blu-ray.com