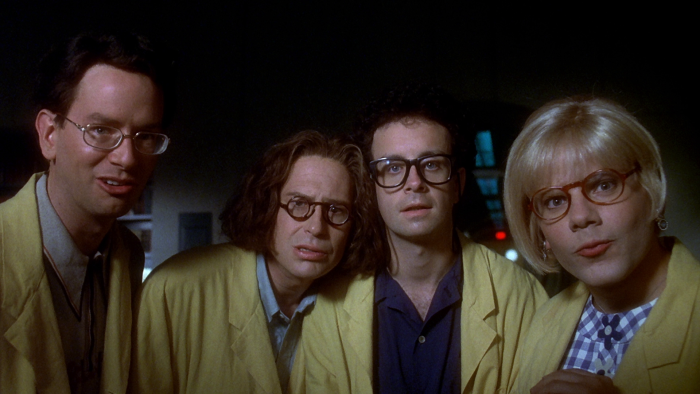 Canadian sketch comedy troupe The Kids in the Hall found their way to producer Lorne Michaels in the late 1980s, with the "Saturday Night Live" honcho helping to bring the sharp talents of Scott Thompson, Mark McKinney, Bruce McCulloch, Kevin McDonald, and Dave Foley to a different kind of late-night program. The Kids in the Hall offered a strange sense of humor that toyed with the surreal and the silly, making funny business that always felt like it was presented solely to entertain the performers, with audience response a happy accident. The troupe managed to bang out 102 episodes of their original show, attracting a passionate fanbase for their specialized appreciation of oddball topics and performance capabilities. The series ended in 1995, paving the way to a film production, with Michaels and Paramount Pictures hoping to bring The Kids in the Hall to the masses with 1996's "Brain Candy." While the creation of the endeavor didn't go swimmingly, leaving the final cut scattered at times, "Brain Candy" remains quite entertaining, keeping The Kids in the Hall busy with multiple characters and ideas as they work to find some shape to their take on the burgeoning world of pharmaceutical corporation domination. Read the rest at Blu-ray.com