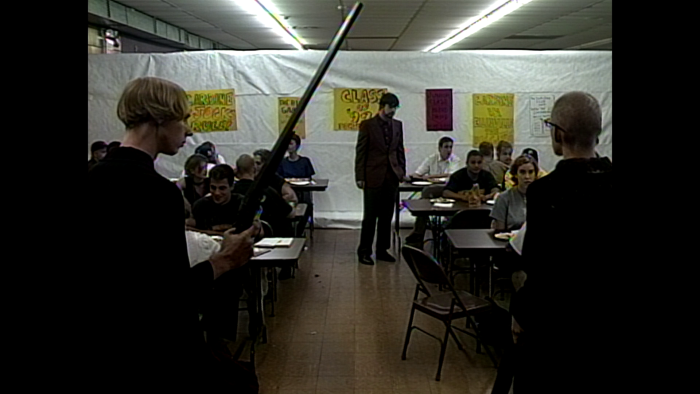 1999's "Duck! The Carbine High Massacre" is meant to be a provocative effort. Its entire existence is based around its potential to offend people, with director/stars William Hellfire and Joey Smack doing whatever they can to call attention to themselves. The feature looks to recreate the events of the Columbine High School Massacre, with the production proudly declaring in an opening card that it relished the chance to "do it first," beating other companies to the punch. Hellfire and Smack certainly have speed (the endeavor was released six months after the real-world incident), but filmmaking polish is not on their list of accomplishments. Using video equipment, amateur actors, and limited locations, Hellfire and Smack end up with an impossibly dull picture that's solely out to exploit a dire situation, and it can't even do that convincingly. "Duck! The Carbine High Massacre" is like a terrible school play one is forced to sit through because their kid is in it, dealing with an assortment of moviemakers who are just trying to finish the project in a hurry, not perfect it. Read the rest at Blu-ray.com