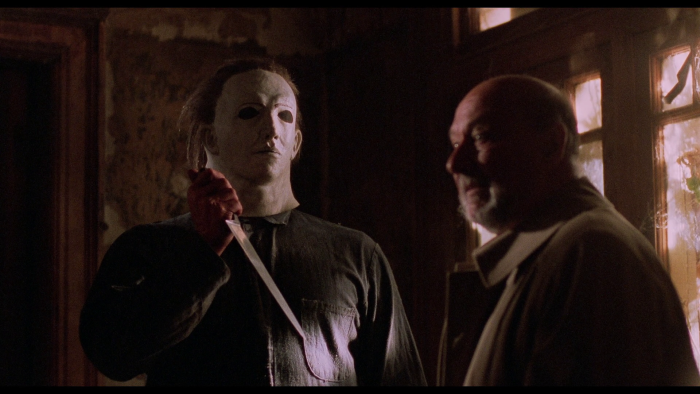 Just when you thought it was safe to go trick-or-treating in Haddonfield again…here comes 1989's "Halloween 5: The Revenge of Michael Myers," which represents producer Moustapha Akkad's quest for maximum box office profit, turning around a sequel to "Halloween 4: The Return of Michael Myers" in just a hair under a year. As explored in the supplementary material on the Blu-ray, the shoot for the fourth sequel began without a completed screenplay, and one can easily tell this from the general make-em-up nature of the film, which never offers a clear franchise idea worth pursuing. "Halloween 5" is a mess, but director Dominique Othenin-Girard tries to provide a stylish return to Michael Myers and his night of terror, overseeing impressive technical achievements that help the feature seem a little different than what's come before. Beyond some slick moviemaking, the endeavor doesn't come together, stumbling around with half-baked ideas and needless character deaths, trying to keep the gravy train running without thinking things through. Read the rest at Blu-ray.com