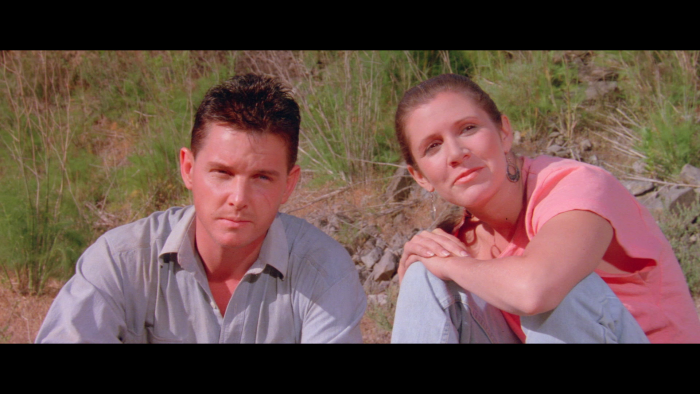 After the success of "Star Wars" in 1977 and its sequels in the early 1980s, film producers scrambled to cash in on a trend, offering all sorts of low- budget productions meant to exploit sci-fi endeavors capable of beguiling audiences with action on a much smaller scale. Australia didn't want to be left out of the fun, turning to the complexity of time travel for their offering of blockbuster entertainment: 1987's "The Time Guardian." Co- writer/director Brian Hannant (co-writer of "The Road Warrior") makes a valiant effort to deliver something big with the picture, filling it with rampaging cyborgs, laser weapons, a massive ship, and a supporting turn from Princess Leia herself, Carrie Fisher. However, the helmer can't quite get the feature out of first gear, fighting to make sense of the story and characterization while visibly struggling with his limited funding, trying not to make the whole thing look ridiculous. He's not entirely successful with that mission, with "The Time Guardian" best appreciated by viewers used to the world of B-movies and their disappointing limitations. Read the rest at Blu-ray.com