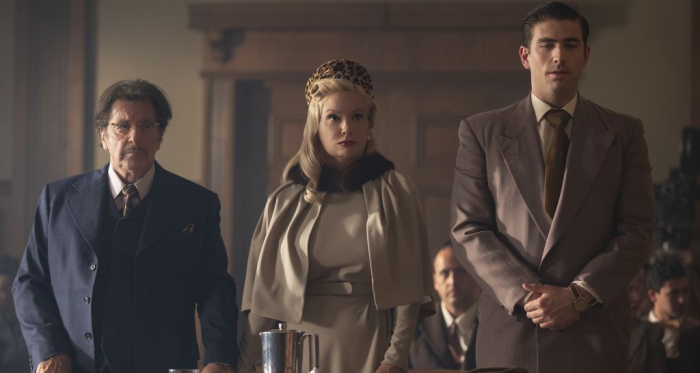 “American Traitor: The Trial of Axis Sally” hopes to refresh viewers on a largely forgotten area of World War II, exploring certain life choices made by Mildred Gillars, an American-born resident of Germany who eventually became one of the leading voices of Nazi propaganda efforts. The screenplay by Vance Owen, Darryl Hicks, and Michael Polish (who also directs) does the expected, working to understand the ways of a hated woman who pledged her allegiance to evil, endeavoring to understand what kind of survival instinct was required during a confusing time of global crisis. “American Traitor” is about Mildred’s experiences in Berlin, but it’s also a courtroom drama, and a particularly boring one at that. Polish tries to generate some level of psychological exploration when dealing with such a controversial person, but the feature is flat-out motionless at times, forcing co-star Al Pacino to summon his hammiest thespian ways to help provide some energy to an otherwise deathly dull film. Read the rest at Blu-ray.com