Home Archives Profile Subscribe
Film Review - The Mitchells vs. the Machines
Film Review - Street Gang: How We Got to Sesame Street

Film Review - Together Together 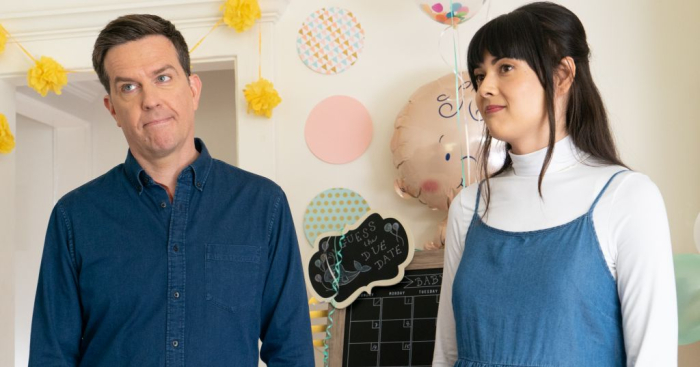 It takes something special to make a relationship story work these days, and writer/director Nikole Beckwith has exactly that with “Together Together.” It’s a story about love developing between two vastly different people, but it remains careful about the tentative union, keeping the material away from a sitcom approach. It’s also a pregnancy tale, but Beckwith doesn’t turn the experience into a wacky event with nervous parents. She avoids most cliches with the endeavor, preferring a human approach to the complications of parenthood and partnership that arrive in the movie. “Together Together” works extremely hard to remain focused on feelings, and Beckwith is triumphant in that regard, creating an intimate but approachable odyssey of connection during a special experience, working with a terrific cast to bring it to life.

Matt (Ed Helms) is a fortysomething guy who’s ready to be a father. He’s hired Anna (Patti Harrison) as a surrogate, offering the 26-year-old woman a large amount of money to carry his baby for the next nine months, inspiring a relationship between the opposites that’s initially difficult to process. The situation calls for boundaries, but Matt is a passionate guy, growing protective of Anna as she deals with everyday life, trying to remain supportive without understanding his own intensity. As her pregnancy begins to take shape, Anna reunites with unresolved feelings concerning her estranged family, getting in touch with long dormant emotions, which complicates her experience with Matt. As the months pass, the twosome gets to know each other, growing connected as they experience a life-changing event together. However, while excitement surrounds the upcoming arrival of the baby, Matt and Anna begin to develop an unexpected attachment, complicating their eventual and mutually agreed upon separation after the birth. 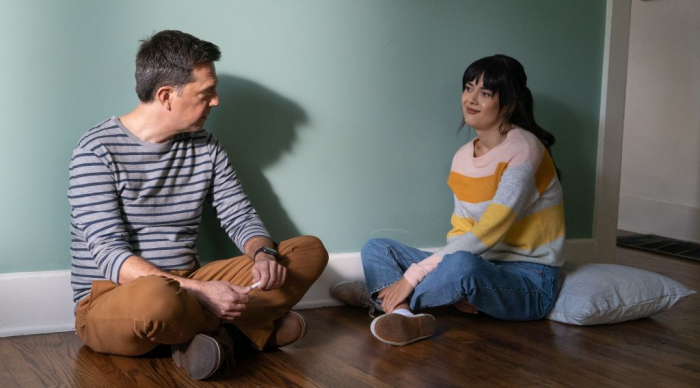 We first meet Anna as she’s being interviewed by Matt for the surrogate job, fielding questions about her honesty and responsibility, tripping on a query about the worst thing she’s ever done. The pairing is unusual, and Beckwith’s screenplay clearly addresses that, with Anna well aware of her own age as she gets to know Matt, a much older man doesn’t want to be viewed as a father figure for his surrogate, but he can’t help but keep close tabs on her. “Together Together” provides a familiar set-up for a comedy, placing two different generations into a pressurized situation which requires them to form some level of partnership. The potential for an “Odd Couple” approach is there for the taking, but Beckwith gently refuses the opportunity, preferring to depict Anna and Matt as dimensional characters trying to make sense of an alien test of teamwork.

“Together Together” mostly tracks Matt and Anna’s developing relationship, which begins with pleasantries and rulemaking before breaking down into something more intimate. Matt’s hypersensitivity to everything largely fuels comedic events, with the impatient father-to-be becoming nosy around Anna, who’s trying to hide the pregnancy from co-workers and lovers before she really starts to show. Matt’s reaction to casual sex and personal care is amusing, along with the duo’s behavior during sonogram visits, using their appointments to deal with each other (Sue Bradshaw is great as a technician who doesn’t want to get between the pair), which they fail to do when sitting down with an actual therapist (Tig Notaro). Warmth develops between Matt and Anna as “Together Together” unfolds, bonding over viewings of “Friends” (a show Matt adores), and they share confessional time, revealing disappointments and mistakes, including Anna’s family issues, triggered when she gave a baby up for adoption during high school. 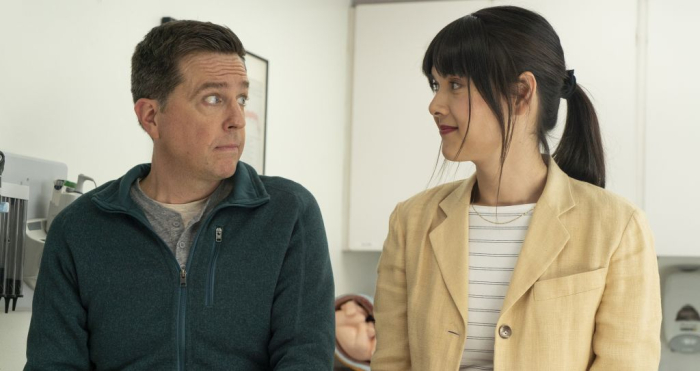 Shenanigans aren’t welcome in “Together Together,” which grows quieter as it goes, reflecting silent deliberation in play as Anna faces an educational future in another state and Matt gets closer to his fatherhood dreams. The twosome also tries to figure out the details of their connection, creating an emotional bond that’s difficult to identify. In her first starring role, Patti Harrison is absolutely sensational as Anna, projecting a perfect sense of vulnerability in the part, also sharing strong chemistry with Helms, who gradually loses his habitual comedic tics as the movie nears its conclusion. The stars bring the subtleties of Beckwith’s screenplay to life, making the endeavor feel as real as possible while still indulging some funny business, most of it highlighting irrational anxieties. “Together Together” offers a tender assessment of unanticipated harmony, staying sweet and real as Beckwith stays true to the realities of this unique pairing.