Film Review - The Mitchells vs. the Machines 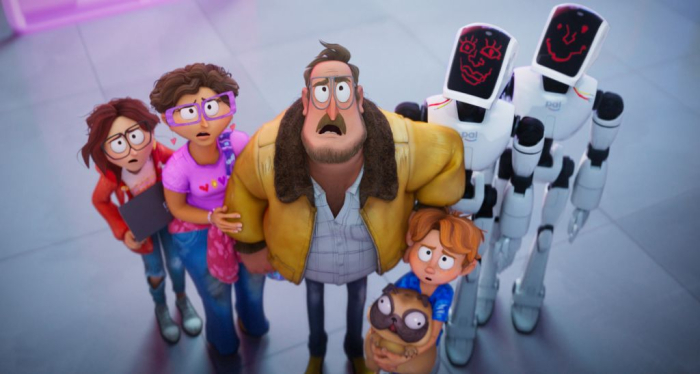 Family issues and a device apocalypse compete for screen time in “The Mitchells vs. the Machines,” the latest offering from Sony Pictures Animation, who recently enjoyed a creative and financial breakthrough with 2018’s “Spider-Man: Into the Spider-Verse.” Keeping the visual style of the hit film, but losing the superhero, writer/directors Michael Rianda and Jeff Rowe hunt for a comfortable balance between sensitive material about the familial experience and the frantic scope of the titular war. “The Mitchells vs. the Machines” is superbly crafted and cast, maintaining a sharp sense of humor that plays into today’s meme-saturated world, and it’s guaranteed to please younger viewers eager to watch something that’s silly and speedy. Rianda and Rowe show difficulty sustaining such storytelling velocity, getting lost in the manic energy of the effort, but there are moments of cartoon clarity that keep the movie together.

Katie Mitchell (voiced by Abbi Jacobson) is a Michigan teen about to head off to college, attending a California film school where her dreams of creativity, surrounded by like-minded students, are about to be fulfilled. Fearful that he’s lost his connection to his daughter on the eve of her departure, Rick (Danny McBride) hastily organizes a road trip for the clan, joined by his wife, Linda (Maya Rudolph), and dinosaur-loving young son, Aaron (Michael Rianda). Hitting the interstates on a quest to bond as a family, Rick and Katie struggle to communicate, trying to make something magical happen. Household concerns are soon put on the backburner when longtime virtual assistant Pal (Olivia Coleman) decides to enslave humanity after tech guru Mark (Eric Andre) opts for a system overhaul. Faced with robot hunters and Pal’s plans to rid the Earth of people, the Mitchells go into survival mode, desperate to stay together as they search for a way to prevent the end of the world.

Katie is a kid who lives to express herself through “weird art.” She’s a spirited adolescent, turning to filmmaking to create graphic-intensive tales of heroism and comedy, often casting the family pug, Monchi, as her leading man. Now she’s ready to take her talents to college, recognizing that she’s alone in Michigan, low on friends and support from Rick, eager to find others like her in California. “The Mitchells vs. the Machines” establishes a disconnect in the household, with Rick an outdoorsman growing estranged from his own daughter, unable to relate to her gifts and special energy, at least in a way that comes naturally to Linda and Aaron. It’s a domestic tear that requires mending, inspiring the road trip plan, which puts Katie in a car with her family for a week of driving, making stops for rest and roadside attractions.

Villainy takes shape in Silicon Valley, with Pal learning she’s being replaced by a major upgrade, making the choice to claim ownership of Earth, removing the swipe-happy users who’ve never appreciated the program. She’s made use of a robot army, collecting humans for caging (soothing them with free wi-fi), making plans to launch them into space. “The Mitchells vs. the Machines” is most inspired during initial scenes of panic, with the family experiencing an attack at a rundown dinosaur park, doing their best to avoid detection as they assess the bewildering situation. They learn to work together again as a team, and they pick up more members in Eric and Deborahbot, two defective robots who help to form a plan to stop Pal, adding more commotion to the hectic household dynamic. The production creates a colorful realm of slapstick and action, keeping things cartoony as the battle begins, and Katie’s vision for non sequiturs and cinematic fantasy remains throughout, giving the feature adrenaline shots of screen decoration as the characters try to avoid danger and take on Pal, eventually making their way to a mall where every machine tries to kill them, including a toy store filled with Furbys. 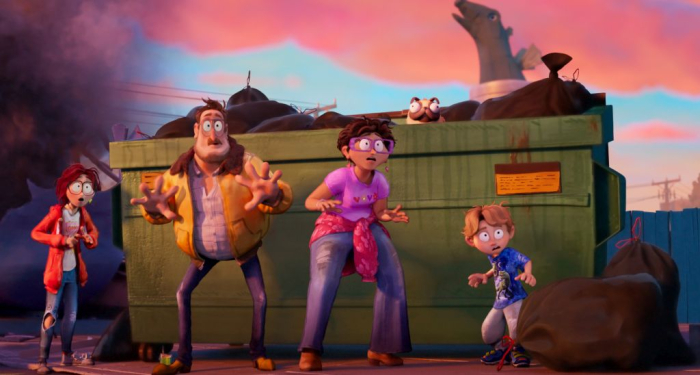 The sugar rush nature of “The Mitchells vs. the Machines” is enjoyable for the first two acts, with expressive voice work bringing distinct personalities and comic timing to life, and the visuals are outstanding. Once the adventure reaches Silicon Valley in the final showdown, Rianda and Rowe run out of ideas, offering a bloated conclusion and a repetitious assessment of family feelings, hammering viewers with Mitchell communication problems to support a bright ending. The material means well, tracking the renewal of stagnant relationships and reinforcing the love shared within a family unit, but “The Mitchells vs. the Machines” loses its rhythm as it strives to create a massive conclusion and still deal with tender emotions. The picture doesn’t fall apart, but growing concern to remain with formula drains some of the fun factor, keeping the endeavor uncomfortably top heavy with crazy cinematic energy.