Film Review - Secrets of the Whales

James Cameron likes water. More specifically, he’s fascinated by the depths of the ocean, spending his career exploring strange deep-sea discoveries (1989’s “The Abyss”), aquatic tragedies (1997’s “Titanic”), and has personally spent time in various submersibles, using his incredible wealth to fund voyages into oceanic darkness, offering viewers a chance to experience the underwater world alongside him. Heck, the man even made a movie about flying fishes (1982’s “Piranha II: The Spawning”), so clearly there’s something about this Earthly kingdom he can’t flush out of his system. For “Secrets of the Whales,” Cameron takes an executive producer position, overseeing the creation of a four-part documentary on these magnificent creatures, with directors Brian Armstrong and Andy Mitchell doing the heavy lifting, sending cameras to the far reaches of the world to capture the behavior of whales, getting to understand what makes them tick and identify how much in common they have with humans.

“Secrets of the Whales” offers four different episodes to complete the documentary journey. In “Orca Dynasty” (48:31), time is spent with the “ocean’s top predator,” visiting lands such as New Zealand to understand hunting techniques that’ve been passed down through generations, presenting a special knowledge as mealtime arrives. “Humpback Songs” (49:32) examines the titular communication tool, which comes into play during the organization of massive migration efforts, with the whales using their special sounds, creating a language that remains a mystery to human researchers. “Beluga Kingdom” (44:56) travels to the Canadian Arctic, where the white creatures gather in a special spot to provide themselves with comfort and safety as the next generation of belugas are introduced to the demands of survival. And “Ocean Giants” (46:37) travels to various areas around the globe, observing the contact and culture of sperm whales. 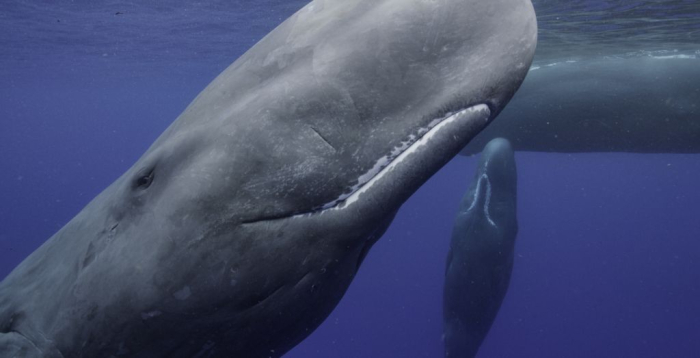 Joining Cameron on this adventure is Sigourney Weaver, the star of “Aliens” and “Avatar,” lending her silky voice to the documentary as a way of providing a level of comfort and familiarity as she lays out a heavy amount of information. It’s nice to have Weaver around, offering dramatic emphasis for Armstrong and Mitchell, who take the experience to different locations around Earth, on the hunt for whale footage that hasn’t been seen before, which required years of filming. If there’s a true human character in “Secrets of the Whales,” it’s Brian Skerry, who appears in every episode of the series. Always introduced as a “world-famous” photographer, Skerry’s role is to reinforce the awe of it all, popping up from time to time to take pictures of amazing moments with the stars of the show. He’s joined by a few experts in sound analysis, but Skerry is presented with the most screen time, keeping viewers aware that whales are special creatures and their mystery has yet to be solved, with observation still revealing previously unknown behaviors.

“Secrets of the Whales” starts off strong with “Orca Dynasty,” which explores the hunting journey of killer whales. The production travels to Norway to capture the herring feeding frenzy, also happening across a mother pushing her deceased calf along, with this act of mourning sometimes carry on for days as loss is processed. In Antarctica, the protection of young is prioritized as fur seals fearlessly move in for the kill. “Humpback Songs” doesn’t break new ground when it comes to the study of the gigantic whales, examining bubble-net feeding in Alaska and breaching habits in Western Australia. The episode scores with a study of music, analyzing communication tones, and there’s a krill feast to be enjoyed in Antarctica, putting the humpbacks in orca waters. “Beluga Kingdom” is a bit strange, as only some time is spent with the bone-white creatures, with focus soon turning to narwhals, spotlighting their hunting and nursing events. And “Ocean Giants” is perhaps the least compelling chapter of the bunch, offering a lengthy overview of click communication (coming in at volumes that would destroy human ears) and culture habits as gatherings commence.

Cameron makes an appearance at the end of every episode, offering a recap of talking points and marveling over whale abilities, including deep oceanic diving. He’s trying to give “Secrets of the Whales” a little star power, which it doesn’t need, but it’s hard to shake the reality that this series is much like other National Geographic programs, with gorgeous footage, exotic locations, and fascinating creatures to follow. There’s a formula to this style of “edutainment” that’s comforting but also a bit frustrating at times, as the whole show could benefit from a fresher approach, shaking up the documentary norm. Still, it’s easy to get lost in parts of “Secret of the Whales,” which offers valuable reminders of human interference in nature’s ways, highlighting pollution and overfishing as problems facing the whales. And there’s the sheer majesty of the subject, as Armstrong and Mitchell supply copious amounts of astonishing footage, giving viewers a crisp, full look at the wonders of the ocean.