It’s about time someone made a film about the world of tabletop gaming, which has experienced a resurgence in popularity over the last five years. Mercifully, writer/director Michael Lovan doesn’t make a documentary with “Murder Bury Win,” instead using the mechanics of gameplay and the ruthlessness of the marketplace to inspire a comedic rendering of board game horrors playing out in the real world. Lovan doesn’t have big bucks to bring his vision to life, instead offering an inspired screenplay that, for the first half, secures a playful understanding of creative partnerships and failure, soon adding some macabre business to twist the material in all sorts of directions. “Murder Bury Win” could use an editorial pruning, but it’s highly amusing at times, offering committed performances and periodic darkness to keep the whole endeavor enjoyable.

Adam (Erich Lane), Chris (Mikelen Walker), and Barrett (Henry Alexander Kelly) are just about to finish their debut tabletop game, “Murder Bury Win,” putting their hope into a crowdfunding campaign to bring their vision to players everywhere. Instead of success, they find no takers, leading the threesome into depression, about to quit their dream altogether. Sadness is replaced by excitement when the men are contacted by Victor Von Stubbs (Craig Cackowski), the most successful game maker around, and he’s interested in meeting the guys to discuss the game mechanics of “Murder Bury Win.” Traveling to a cabin in the woods, Adam, Chris, and Barrett are delighted to spend time with Stubbs, learning more about the secretive man and his intense testing process, which involves all four of them playing a round of the game. However, such enthusiasm dies once the visitors realize what a ruthless businessman Stubbs is, commencing a real-world experience in crime that puts Adam, Chris, and Barrett to the test as aspiring murder masterminds. 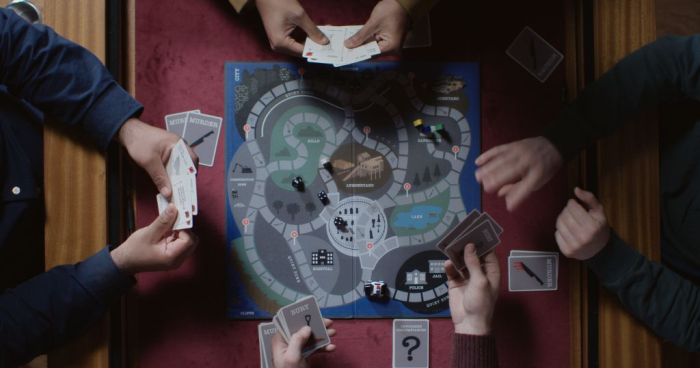 “Murder Bury Win” doesn’t delve too deeply into gameplay rules and nuance, with the writing making the concept of the game clear: the player is the murderer. Instead of solving a crime, Barrett, Adam, and Chris’s creation tasks characters to figure a way to commit horrors, creating multiple opportunities to cause bodily harm as players move around the board. It’s a fiendish quest that plays directly into Adam’s skills as a dreamer of doom, working out weapons and methods to use during play, getting hung up on the use of a bear trap, an effective but cumbersome device. Chris is the salesman, working at a game store during the day, where he’s reminded of Stubbs and his massive successes, also greatly bothered by the popularity of “Puppies on Fire, an “Exploding Kittens”-style blockbuster, which represents the material’s only direct poke at the tabletop industry’s simplistic offerings. Barrett is also a creative force, but a milder man, trying to remain positive as the gang experiences the humiliation of a crowdfunding disaster, dashing their publishing hopes.

While Lovan briefly visualizes gameplay through short fantasy sequences, he’s more interested in the question mark of Stubbs, an industry titan who contacts Chris out of the blue, requesting his company at a cabin located in the middle of nowhere. It’s an engaging sequence, meeting an eccentric man who’s reached legendary status with his hit creation, “Murder Wall,” offering his genius to three overwhelmed men who can’t believe their luck, soon tasked with playing a round of “Murder Death Win” with their idol. Stubbs hammers hard on the importance of memorable motives for the game, and the guests soak up the suggestions. While Lane, Walker, and Kelly all give energetic performances, Cackowski (a veteran of “Drunk History”) puts on a show of strange energy as Stubbs, making for an intriguing midsection as the veteran guides the rookies before offering them a contract to make “Murder Death Win.” It’s a dream come true for the guys, but predator tactics are picked up on, creating tension during the negotiation. 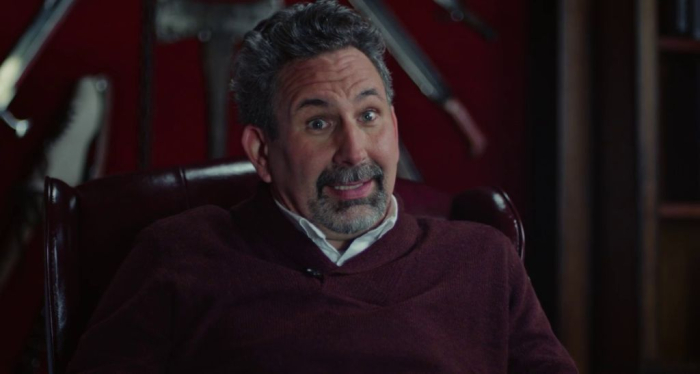 Things inevitably go wrong in “Murder Death Win,” with Lovan cooking up a gruesome, darkly comedic series of mishaps for the foursome, forcing the game makers to put their fictional world to the test. The screenwriting reaches a fever pitch, but it comes too soon, with energy slowly leaking out of the picture as it enters its second half, finding an encounter with a curious cop stopping the film instead of taking it to another level of madness. It doesn’t end as enthusiastically as it begins, but “Murder Death Win” retains a healthy amount of charm and peppers in some tests of conscience to keep the viewing experience compelling, watching these characters deal with an unexpected situation they’ve been unknowingly preparing for during the development of their game.