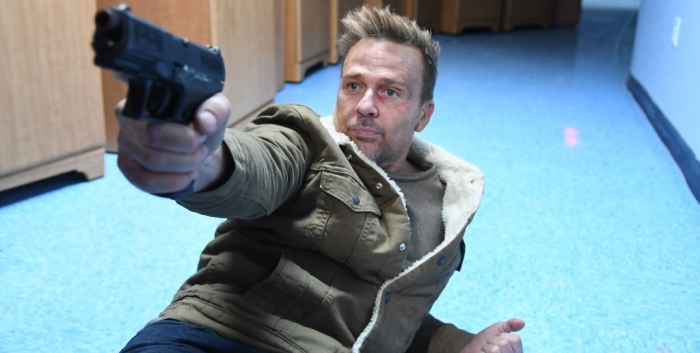 The “Die Hard” formula still has life in it, but it requires the leadership of filmmakers willing to put in the effort to create a suspenseful ride of askew heroism, keeping the story moving, allowing for plenty of action to command attention. “Assault on VA-33” is the latest subgenre offering, and it underwhelms in a major way, taking the showdown to a Buffalo, New York veterans affairs medical center, which is an unusual location for this type of VOD mayhem. Director Christopher Ray and screenwriter Scott Thomas Reynolds (who last collaborated on “2nd Chance for Christmas,” which starred Vivica A. Fox, Jonathan Lipnicki, Tara Reid and Mark McGrath – more of a warning than a cast list) don’t push hard enough to generate a thrill ride with the feature, showing more interest in dreary plot specifics and drab supporting characters as the movie gradually slows to a full stop. The “Die Hard”-ness of the material is missing, replaced with a steady stream of tedious conversations and a half-baked plot. Read the rest at Blu-ray.com