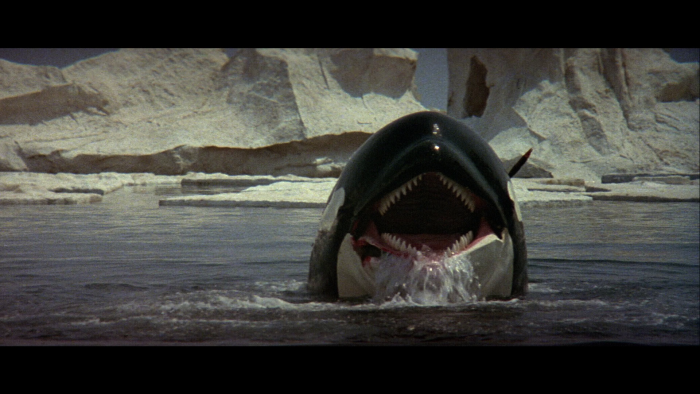 1977's "Orca" was created to cash-in on the massive, industry-changing success of 1975's "Jaws," with executive producer Dino De Laurentiis trying to get in on a developing trend with his own take on man vs. sea creature. He can't quite shake the shark envy out of his system (the film opens with sequence involving a Great White), but De Laurentiis elects to head in a slightly different direction with the picture, overseeing a screenplay that puts a killer whale on the hunt for revenge against a particularly selfish human hunter. Director Michael Anderson strives to make something somber with "Orca," dealing with an intelligent apex predator and a screenplay that endeavors to use some sense of marine science to inspire a suspenseful tale of vengeance. The feature wants to be sensitive and deliver a B-movie event, and while Anderson tries to mount an extravaganza featuring "Jaws"-like attacks and conflicted characters, this effort wipes out when it attempts anything more than cheap thrills. Read the rest at Blu-ray.com