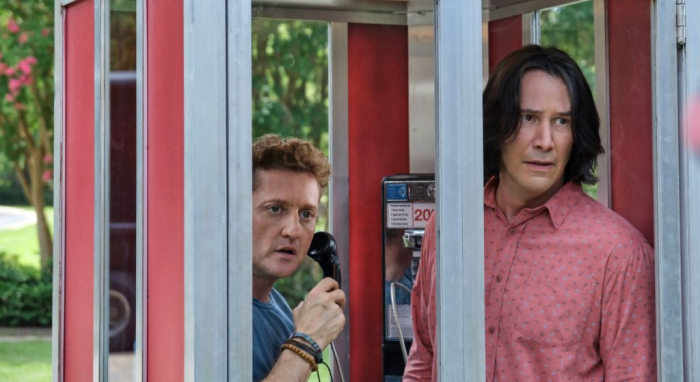 In 1989, there was “Bill & Ted’s Excellent Adventure,” a modest teen comedy that wasn’t expected to do much business, only to become one of the biggest hits of the winter. It offered the world two lovable goons who needed time travel to help finish their history homework and save the world. A sequel arrived in 1991, and “Bill & Ted’s Bogus Journey” was a risk, dialing back the cuddliness for an edgier take on time travel, sending the characters on a darkly comedic adventure to Heaven and Hell. It was magnificent fun. There was a cartoon, merchandise, and even a cereal, but the Bill & Ted experience was pronounced dead in 1992 (after an unwatchable live-action series rightfully tanked), leaving fans to dream about another lap around the circuits of time. 28 years later, the boys are back with “Bill & Ted Face the Music,” and while they’re older and not necessarily wiser, the chemistry shared between stars Keanu Reeves and Alex Winter remains delightful, while screenwriters Chris Matheson and Ed Solomon actually find a way to shake up this universe for one last round of musical unity. Read the rest at Blu-ray.com