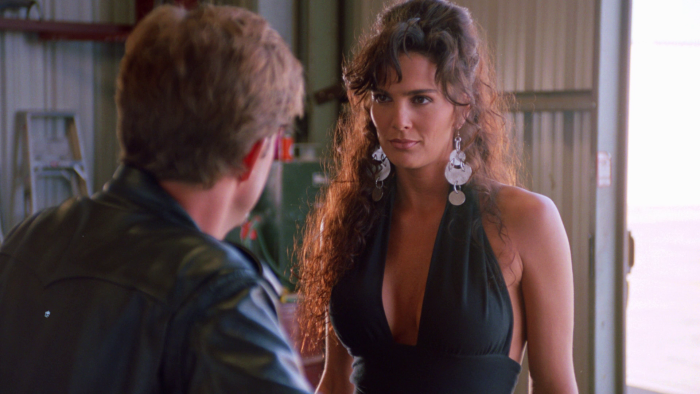 In 1985, writer/director Andy Sidaris decided to create his own special universe of heroes and villains, using the ways of no-budget filmmaking to generate cheap thrills through the use of exotic locations, rough action, and nudity. "Malibu Express" wasn't trying to alter the curve of exploitation cinema, but it did the trick for the VHS generation, inspiring Sidaris to keep churning out titles to meet demand, reusing actors and hot tubs as he built the Malibu Bay Films empire (joined by his wife, Arlene Sidaris). 1993's "Fit to Kill" is the eighth installment of the loosely defined series, continuing the adventures of bikini-clad security agents as they defend America with their firepower, sleuthing, and distinct skills of seduction. There's certainly a "if you've seen one of these things, you've seen them all" vibe to the picture, but to criticize Sidaris for his unrepentant recycling is missing the point of the Malibu Bay experience. "Fit to Kill" isn't reinventing the wheel, but there's some cleverness to be found in the movie, and Sidaris is wise enough to introduce actress Julie Strain to the family, with the statuesque Penthouse Pet bringing needed attitude to the franchise, keeping others on their toes. Read the rest at Blu-ray.com