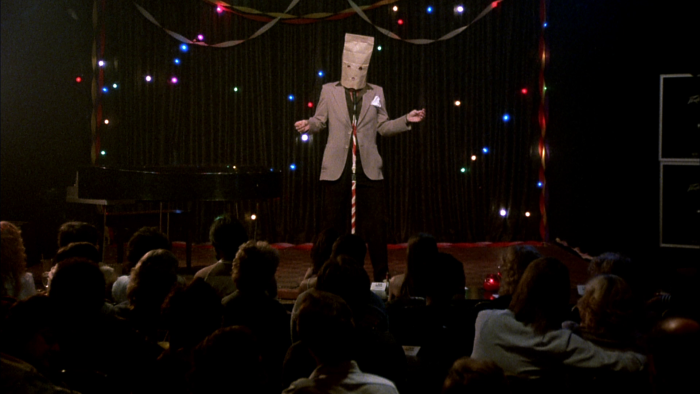 Murray Langston achieved a mild degree of success as a comedian in the 1970s, making the rounds on television variety shows and "Candid Camera," trying to build demand for his services. Fame was elusive, forcing Langston to take a gig on "The Gong Show," carrying such shame about the appearance, he decided to cover his head with the paper bag and tell jokes as "The Unknown Comic." The bit, meant to be a lark, ended up taking Langston to the big time, finding his hook as a speedy jester without an identity. "Night Patrol" is created to do something with that pop culture visibility, with Langston co-writing and starring in a picture that's meant to showcase his abilities as a leading man and celebrate his sense of humor, calling in comedy club pals to help boost the marketplace appeal of the feature. The 1984 endeavor is certainly the work of Langston, who puts his faith in director Jackie Kong (who also co-scripts) to translate his brand of funny business to the big screen. The result is an extraordinarily painful viewing experience, with "Night Patrol" intentionally striving to be odious and lazy, finding Kong way out of her element as a mastermind of silliness, while Langston's taste in punchlines is remarkably dire. Read the rest at Blu-ray.com