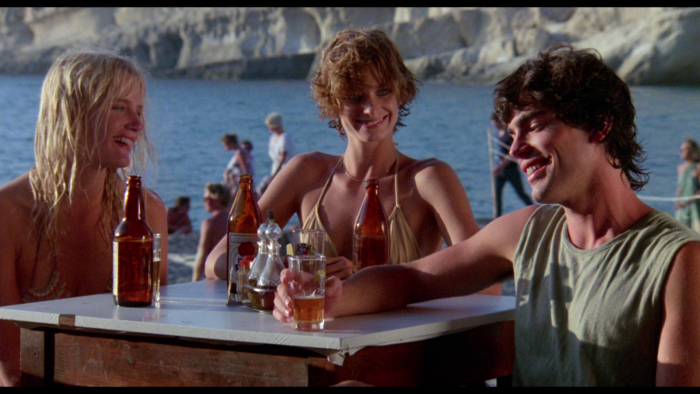 1982's "Summer Lovers" is an important offering in the career of director Randal Kleiser, who, up to this point, was a major force in Hollywood. Kleiser was able to acquire the attention of a younger audience, making a box office blockbuster in 1978's "Grease," and surprising many with the staying power of 1980's "The Blue Lagoon." He was positioned for another smash with "Summer Lovers," which uses the formula of young people in lust and love and ages it up some, with Kleiser trying to inch his way into adult-oriented complications. His answer to the relative innocence of "The Blue Lagoon" is to spend time on the nude beaches of the Greek islands, capturing the sexual heat and emotional complications of a love triangle in the middle of paradise. Kleiser can't get past the slightness of the material, which never has enough texture to completely realize such psychological gamesmanship and eventual softening of personal defenses. But the helmer does maintain command over the location, constructing an evocative understanding of bodily freedoms and lustful sway, which is almost enough to secure an inviting viewing experience. Read the rest at Blu-ray.com