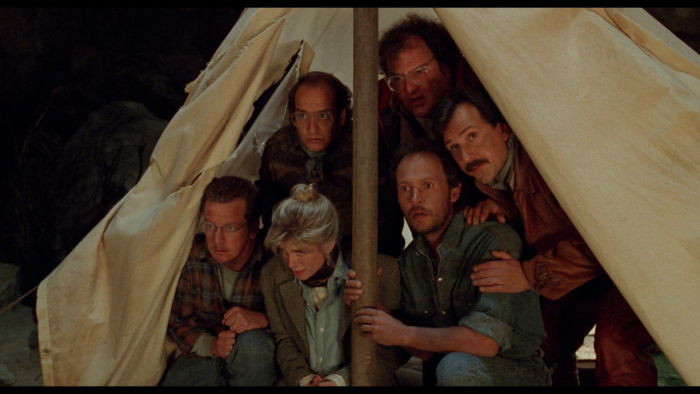 There were a good few years where a Billy Crystal comedy was generally considered an appealing event. His follow-up to "When Harry Met Sally," "City Slickers" was the comedian's "Avatar" in terms of box office success and media saturation, fitting Crystal for leading man shoe lifts via an unlikely vessel of bellylaughs and cowboy buffoonery. "City Slickers" is easily digestible as a well-crafted comedy, loaded with slapstick and sincerity, permitting Crystal a starring vehicle to exercise his best Jackie Mason impression while submitting a successful catchphrase in Mitch's greeting, "Helllllooooo." The man is genuinely funny here, distributing one-liners and pained expressions, playing beautifully off the likes of Daniel Stern and Bruno Kirby, while the producers filled supporting roles with a number of colorful character actors, including Supergirl herself, Helen Slater. And then there was Jack Palance, who clearly beamed down from his private asteroid to portray leathery cowboy Curly, a man so cured, he can light a match off his own cheek. Palance would go on to accept accolades and an Academy Award for his work here (cue the one-armed push-ups clip), and all of the love was heartily deserved, with the actor playing to his breathy strengths as a tough guy who develops a fondness for Mitch's neuroses. Palance and Crystal worked beautifully together, creating wonderful highlights along the way. Read the rest at Blu-ray.com