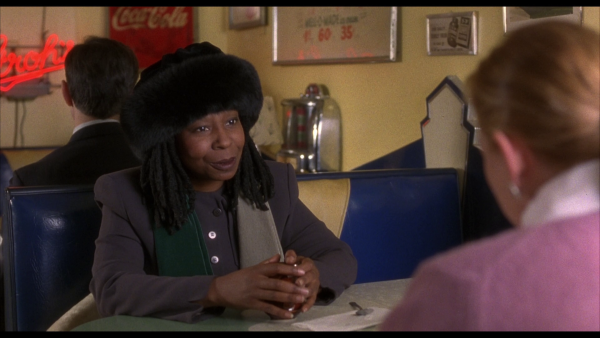 It's obvious that the success of 1992's "Sister Act" had a profound effect on the career of Whoopi Goldberg. She was already popular, accomplished all around and an Oscar winner, but the box office triumph of the singing nuns movie created the potential for a brand name, and Disney wanted to keep that magic going for years to come. It didn't last for long (1993's "Sister Act 2" was rejected by audiences), but as the 1990s rolled out, Goldberg toplined a few comedies for the studio (with Polygram financing), with 1996's "Eddie" and "The Associate" acting as a sort of career roof for Goldberg, who was singlehandedly in charge of selling the pictures to the public, with billing demands simply splashing "WHOOPI" on the posters to reel people in. The star was trying to rise in the ranks as a versatile comedic actress with her own fanbase, but with "The Associate," Goldberg was also trying to sneak in some messages on workplace sexism and patriarchal control of Wall Street and the insular world of New York City business. It's not an especially effective farce, but watching the film in 2018, and it's eerie to see how timely the material is, tackling today's concerns 22 years ago. Read the rest at Blu-ray.com