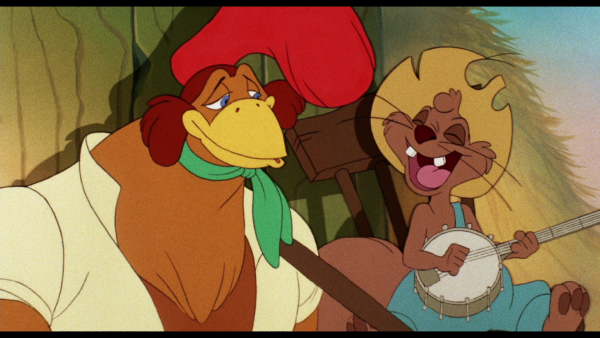 In the 1980s, everything was golden for director Don Bluth. Sure, a few creative setbacks, compromises, and challenges were encountered by the animation helmer, but he enjoyed a string of box office successes and industry triumphs along the way. Commanding "An American Tail," "The Land Before Time" (a picture that inspired 13 sequels), "The Secret of NIMH," and the "Dragon's Lair" saga, Bluth certainly found his particular corner of artistry and worked like crazy to maintain some momentum to a career that, at one point, threatened Disney's animated film dominance. The 1990s, however, were not very kind to Bluth and his vision, with 1991's "Rock-A-Doodle" providing a taste of disasters and disappointments to come. While Bluth has some vision for this loose adaption of a turn-of-the-century play by Edmond Rostand, the production quickly slips out of his control, showcasing rather extreme storytelling disruptions and choppy editing, which overwhelms was appears to have been a fully conceived animation adventure with interesting live-action elements at one point during its development. Read the rest at Blu-ray.com