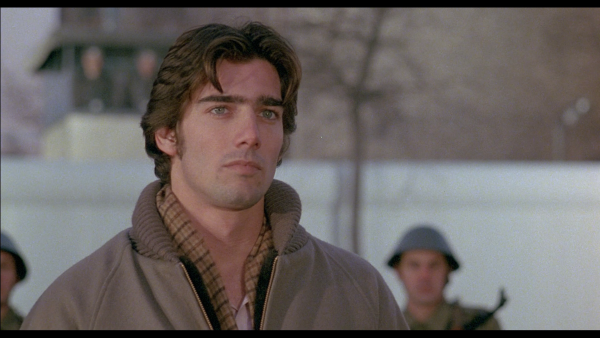 After trying his luck with a "Death Wish" knock-off in 1980's "The Exterminator," writer/director James Glickenhaus ups his game to the international level, trying on the world of 007 in 1982's "The Soldier," which positions Ken Wahl as a James Bond-style superspy trying to prevent the end of the world, or at least the end of affordable gas and peace in the Middle East. Obviously, Glickenhaus doesn't have the money to bring an expansive thriller to life, but he does have a few scrappy ideas for chases and confrontations. "The Soldier" is clunky, teeming with filler and drowsy acting, but when it makes the effort to lock into excitement and supply some crazy stunt work and multiple explosions, it remains passable entertainment, rarely working overtime to become something special. Wahl isn't easy to buy as a world-class master of assassination and political relationships, but he's much more appealing in panic mode, adding his special, slightly sluggish charms to Glickenhaus's vision for big screen adventuring. Read the rest at Blu-ray.com