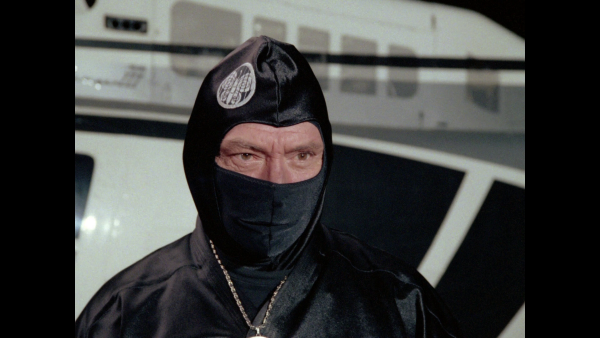 The 1980s were filled with strange fads, including the Rubik's Cube, breakdancing, and Cabbage Patch Dolls, but the oddest pop culture uprising from the decade has to be the surge of ninja-themed entertainment. While there's nothing wrong with a good ninja adventure, the '80s were chock full of them, triggered in part by the cult success of 1981's "Revenge of the Ninja," which spawned a few sequels and partially inspired "The Master," with franchise star Sho Kosugi returning in a supporting role, reclaiming his position as the go-to actor for all cloaked martial arts business. Crazily, the production didn't give Kosugi a weekly shot at impressing American audiences with his physical skill, handing starring duties to Lee Van Cleef, then a 60-year-old man stroking a filmography had him playing all types of hard creeps and antiheroes. When one thinks about the basic flexibility and weapon mastery of a stealthy ninja, Van Cleef and his slight limp doesn't come to mind, but "The Master" has a funny way of making the crazy casting work, finding Van Cleef the most appealing element in the action series, which plays like much of the kid-centric escapist fare from the era, mixing Eastern culture with "A-Team" antics, keeping things sufficiently kick-happy and shuriken-spinning.  Read the rest at Blu-ray.com