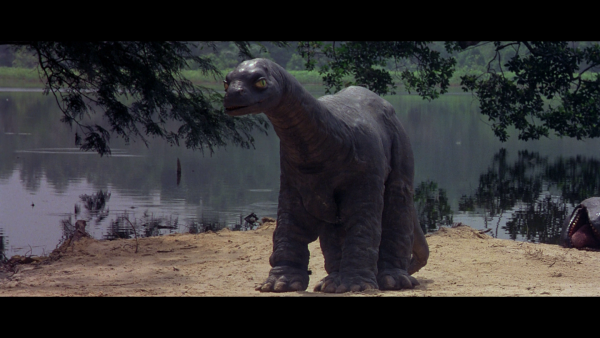 For their third release, Touchstone Pictures (Disney's PG-and-over distribution label) elected to make a movie about a baby dinosaur that wasn't appropriate for little kids to see. 1985's "Baby: Secret of the Lost Legend" makes a lot of odd creative and tonal choices as it assembles a jungle adventure, caught somewhere between trying to be cute and cuddly for family audiences and remaining surprisingly violent to keep adults interested in the survival of animatronic creatures (the tale open with a character getting knifed in the gut). Director B.W.L. Norton (who previously helmed the fascinating failure, "More American Graffiti") finds himself overwhelmed with the job at hand throughout the feature, struggling to find storytelling clarity. "Baby: Secret of the Lost Legend" has a retro appeal to it, especially for those who enjoy displays of rubber suit-based antics, along with miniature work and puppetry, but the film as a whole spends so much time juggling light and dark material, it never has a chance to enjoy itself, becoming laborious and behaviorally confusion rather than engrossing, with touches of awkward Disneyfied adorableness.  Read the rest at Blu-ray.com