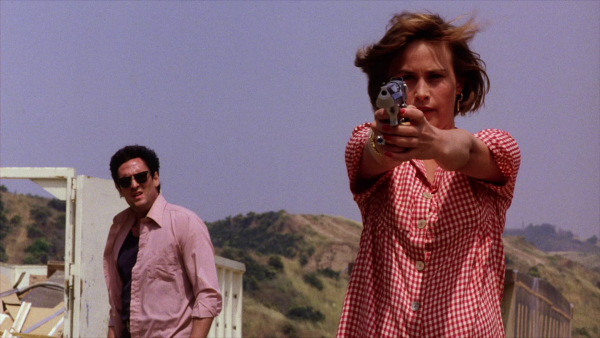 In 1993, Michael Madsen was just getting started on an acting career that would find him playing all manner of squinting bad guys, stuck in a cycle of cinematic crime sprees that play to his natural way with brooding intensity. Coming a year after his star-making turn in Quentin Tarantino's "Reservoir Dogs," Madsen starts to get comfortable with a loquacious crook routine in "Trouble Bound," forced to create chemistry with co-star Patricia Arquette for a road movie that's largely about their softening interplay. Writers Darrell Fetty and Francis Delia go the southwest noir route with the picture, creating a chase between bad guys and troubled people, but they only come up with half-baked ideas, creating a film that spends half its run time trying to be dangerous, and the other half fighting to be funny and flirty.  Read the rest at Blu-ray.com