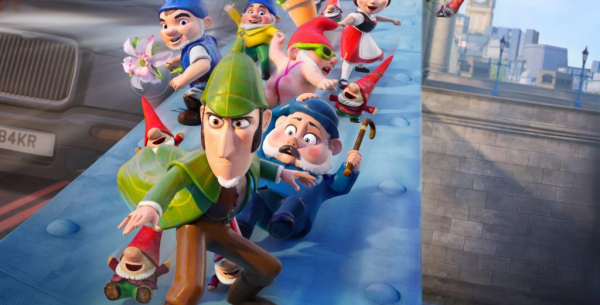 In 2011, “Gnomeo & Juliet” was destined to make a soft landing over a dismal January weekend, but something about the movie appealed to family audiences, who ended up making the picture a surprise hit. Perhaps not by Pixar and Illumination standards, but that a budget-minded, CG-animated film with English humor and music by Elton John (who also produced) could do any sizable business is amazing. Most production companies would jump at the chance to create a sequel, working quickly to cash-in on an unexpected success, keeping a newly christened franchise going at top speed. For reasons not entirely clear, “Sherlock Gnomes” limps into theaters seven years later, and the long wait wasn’t to perfect the screenplay. While “Gnomeo & Juliet” wasn’t a humdinger of a creative achievement, it had moments of silliness that worked. “Sherlock Gnomes” is a more leaden creation, and while not without a few highlights, the sequel tends to abandon what made the first feature somewhat unique and lively. Read the rest at Blu-ray.com