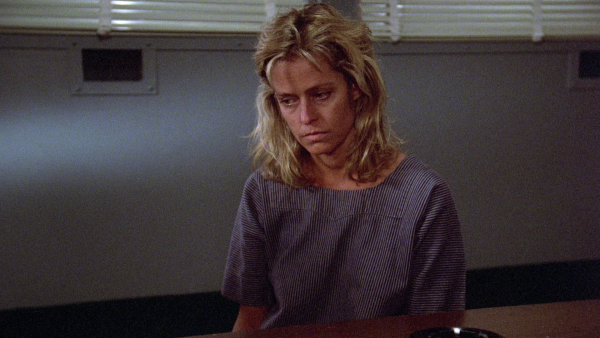 After becoming a sex symbol, or perhaps THEE sex symbol of the late 1970s, Farrah Fawcett struggled to be taken seriously as an actress. After rising to the top of pop culture awareness with "Charlie's Angels," Fawcett turned to television movies to make a different impression. While trying to find a sense of creative satisfaction, Fawcett struck gold with 1984's "The Burning Bed," which offered the actress a chance to put away demands of glamour and portray a woman subjected to horrific abuse in her toxic marriage. "The Burning Bed" takes inspiration from the true-life tale of Francine Hughes (who passed away earlier this year), and director Robert Greenwald ("Xanadu") treats the severity of the story with some care, trying to keep melodramatics at arm's length for as long as possible. But this is truly Fawcett's big showcase, delivering a haunted performance that's impressive in its dramatic commitment and physical display, helping the endeavor remain grounded as its television interests fight for attention. Read the rest at Blu-ray.com