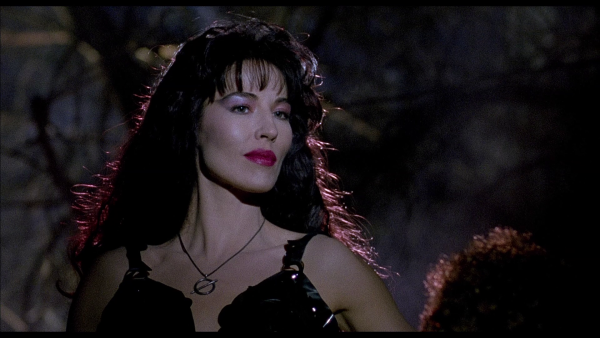 Horror doesn't come easy to 1990's "Night Angel," which is more of an erotic thriller with periodic dips into gore zone activities than a straight nightmare machine. The picture couldn't be more late-1980s if it tried, combining the ways of yuppiedom with freewheeling bedroom antics involving a bloodthirsty demon and her quest to rise in the ranks of the modeling business. Screenwriters Joe Augustyn and Walter Josten are after something awfully specific with the material, which is ambitious in the way it pulls from biblical mythology and Skinemax, but it's clear director Dominique Othenin-Gerard ("Halloween 5," "Omen IV: The Awkening") doesn't quite have a handle on the proceedings, dutifully trying to visualize a haunting of the mind and genitals while keeping the effort soaked in blood. "Night Angel" charms with its interest in make-up effects and period style, but it doesn't have the inspiration to emerge as a formidable genre endeavor, and its titillation factor is debatable.  Read the rest at Blu-ray.com