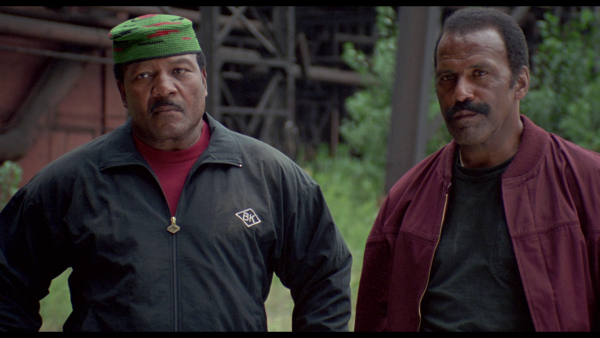 In 1988, titans from the Blaxploitation era (including Isaac Hayes, Bernie Casey, and Jim Brown) reunited for "I'm Gonna Git You Sucka," a parody production from director Keenan Ivory Wayans that triumphantly pantsed the absurdities of the subgenre and embraced some of its effortless cool. In 1996, director Larry Cohen, a player in the Blaxploitation game with movies such as "Black Caesar" and "Hell Up in Harlem," reunited most of the gang for "Original Gangstas," which drops any ounce of intentional silliness, attempting to stage a traditional vigilante actioner with old faces and fists. Results are uneven at best, but when "Original Gangstas" fails, as it often does, there's always the thrill of seeing some of these meaty actors onscreen again, delivering poundings to a younger generation that's been raised without rules and respect. For that alone, the feature is worth a viewing, but it takes considerable patience to get there, as Cohen isn't too concerned with throttling supporting performances, and the messages of Aubrey Rattan's screenplay are confusing, seemingly celebrating a thuggish mentality the protagonists of the story are struggling to extinguish.  Read the rest at Blu-ray.com 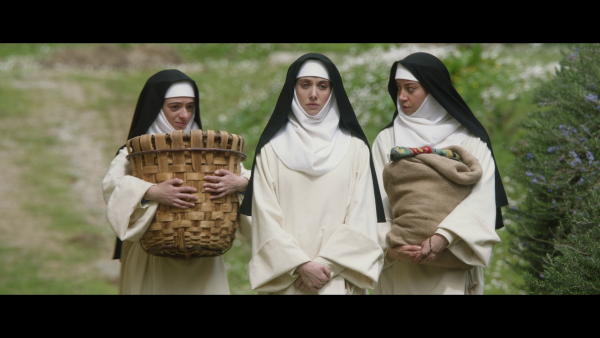 Writer/director Jeff Baena has made a positive impression during his emerging career, pulling off a horror comedy with "Life After Beth," and achieving a cinematic miracle with "Joshy," a movie about male bonding that wasn't basted in ugliness. "The Little Hours" proves to be his greatest tonal challenge yet, mounting a comedy that's not always pursuing laughs, and its target is repression found in organized religion. It's a gamble from Baena, likely alienating a great number of potential viewers right out of the gate, but he mostly sticks the landing, finding ways to scrape out the blasphemy by playing it all so broadly, making a film that certainly has the potential to reach farcical highs, but pulls back a bit too often, perhaps afraid to really dive into the weirdness of the material. Read the rest at Blu-ray.com 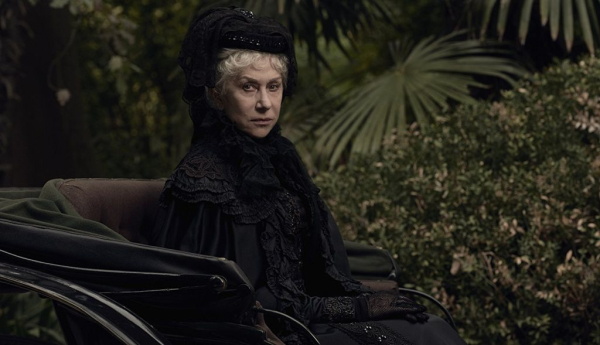 Directors of “Daybreakers” and “Predestination,” Michael and Peter Spierig tainted their promise with last year’s “Jigsaw,” their surprisingly lifeless attempt to resuscitate the “Saw” franchise. It felt like a creative bump in the road for the talented filmmaker duo at the time, but with “Winchester,” disappointment may be their new reality. After delivering all the agony and bloodshed with “Jigsaw,” the Spierigs restrain themselves with their latest picture, orchestrating a PG-13 ghost story that’s more about spooky encounters and exposition than sophisticated suspense. Unfortunately, “Winchester” is a drag, and while it retains visual potency, the screenplay never comes together in an exciting manner, unable to escalate with intrigue and frights as the Spierigs labor to sell a mystery that’s not very gripping to begin with. Read the rest at Blu-ray.com 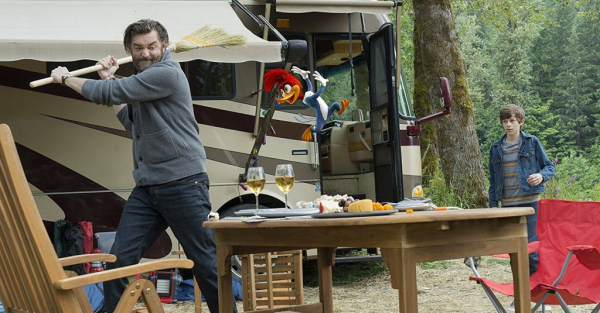 As a character, Woody Woodpecker has always been a rascally creature, bordering on insanity during his early years as a cartoon creation, masterminded by Walter Lantz and Ben Hardaway. In “Woody Woodpecker,” a 2018 effort to revive the looney bird for modern audiences, there’s a scene where Woody farts out his theme song. This is not progress. Attempting to marry live-action and CGI animation in a way that made 2010’s “Yogi Bear” some money, “Woody Woodpecker” is a fairly unendurable creation from a production team that probably has reverence for the colorful icon, but no idea how to translate ink and paint antics to the real world, electing to go as crude and obvious as possible just to get a reaction from younger viewers. “Woody Woodpecker” is bad, real bad, and its hunger to scrape the bottom of the barrel for humor is downright depressing to watch. Read the rest at Blu-ray.com

When one considers the potential of a dystopian actioner with heavy western influences, Peter Howitt, the helmer of “Sliding Doors” and “Johnny English,” is not the first director that comes to mind to help bring it to life. Perhaps trying to shake up his filmography, Howitt should be commended for trying something new, but his command over “Scorched Earth” is difficult to discern, as the feature tries to do too much with a limited budget and thespian skill. The ingredients are there for something interesting, with screenwriters Kevin Leeson and Bobby Mort concocting a cold-blooded revenge saga with weird poisoned future touches, but Howitt hangs on for dear life, out of his element when it comes to the construction of stunt sequences and the summoning of real grit, scratching the gallop right out of “Scorched Earth.”  Read the rest at Blu-ray.com 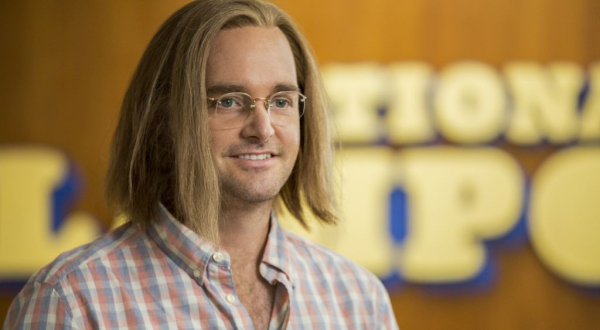 There’s been no shortage of material on the history of National Lampoon in recent years. In 2010, the book “Drunk Stoned Brilliant Dead” was released, inspiring the 2015 documentary of the same title. And there was the 2006 book, “A Futile and Stupid Gesture,” which paved the way for a new film adaptation, eschewing another documentary study of the humor magazine’s rise to enjoy a dramatic take on the carnival of personalities that contributed to the brand name’s wild sense of humor, focusing in on the antics and agony of its co-founder, Doug Kenney. Director David Wain is clearly having the time of his life creating controlled chaos with “A Futile and Stupid Gesture,” filling the frame with famous faces and clever antics, giving the movie a special energy to best celebrate the source material. While he fails to unearth anything new, Wain gets by on enthusiasm, creating a valentine to the magazine and its love of anarchy.  Read the rest at Blu-ray.com

Last November, Jason Momoa portrayed Aquaman in “Justice League,” giving him an opportunity to play a comic book hero with unusual superpowers, living in a strange underwater environment. The actor provided physical and personality bigness that typically comes with this style of entertainment. “Braven” offers Momoa in blue collar mode, playing a character who’s scraping a living together in the wilds of Canada, dealing with very real issues of parental care and management. And yet, there’s interest in giving the actor superpowers once again. “Braven” is a bizarre film, striving to be a sensitive study of a man challenged by responsibility, but it also wants to be an action extravaganza with Momoa easily killing baddies and diving through glass windows. It’s engaging at times, giving the lead a chance to play a normal guy for a change, but the picture is caught between two tonal extremes, lacking a master plan to mix drama and woodsy mayhem.  Read the rest at Blu-ray.com 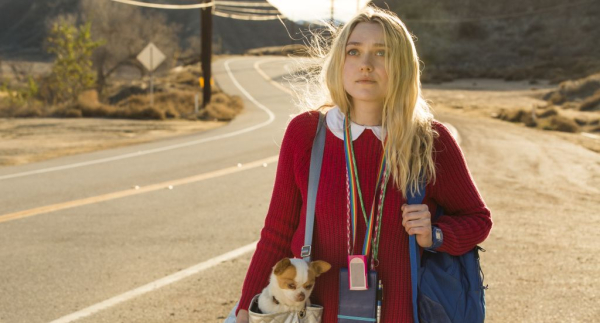 Perhaps the only thing impressive about “Please Stand By” is how production actually manages to secure footage and logos from “Star Trek” to tell a different story about the famous franchise. It seems a little effort was spent on the picture to create its reality of brand worship, but not enough was allotted to the rest of the endeavor, which offers uneasy bouts of quirk to help butter up what should be a terrifying tale of unsteady independence. Perhaps the original screenplay by Michael Golamco was something far more in-depth when it comes to the details of mental health, but director Ben Lewin doesn’t know how to translate such careful characterization to the screen. The “Star Trek” love is amusing, but the rest of “Please Stand By” feels frustratingly short-sheeted. Read the rest at Blu-ray.com 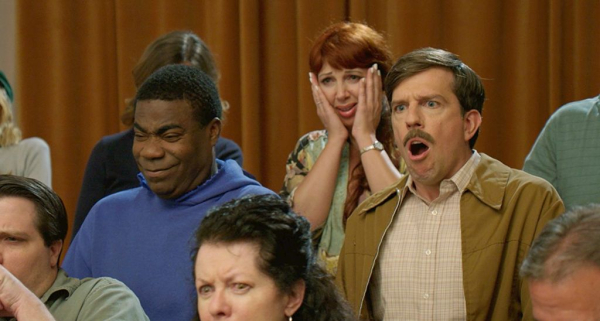 One of the great mysteries in modern Hollywood is how writer/director Dito Montiel keeps receiving funding for his projects. He’s not a skilled filmmaker, and his resume is packed with box office failures (including “Man Down,” “Boulevard,” and “The Son of No One”), making the longevity of his career baffling, always able to pull money together to make a mediocre movie. “The Clapper” is the newest addition to the Montiel line-up of misguided cinema, with his latest perhaps his most insufferable creation, trying to make something sticky sweet with troubled characters, while there’s no defined story to awaken the comatose viewing experience. Perhaps Montiel is after something bigger than what “The Clapper” ultimately offers, but it’s not an ambitious picture, hitting easy targets with crude screenwriting and bland performances.  Read the rest at Blu-ray.com