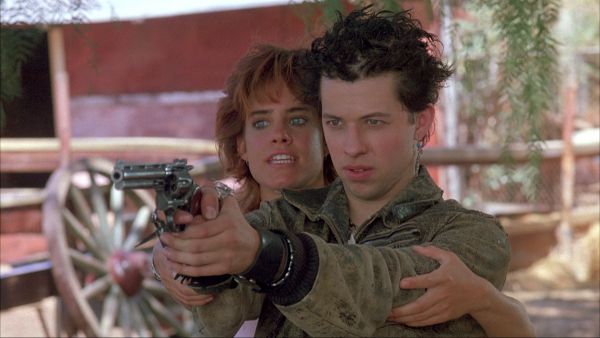 Whatever one thinks of "Dudes," it's certainly not the work of a director who wasn't prepared. By the time she got around to helming the 1987 picture, Penelope Spheeris already created an indelible portrait of the punk rock scene with 1981's "The Decline of Western Civilization," using her experiences with antisocial and depressive behavior featuring the youth of the day to inform her next two movies, 1983's "Suburbia" and 1985's "The Boys Next Door." She was already well-versed in the language and stance of a disillusioned generation, making her a natural fit for the extended oddity of "Dudes," which blends the primal scream of punk rock with the cowboy liberation of life in the Old West. Granted, she's not completely able to tame screenwriter Randall Jahnson's wily imagination, and perhaps nobody could. The film is a mess, but a fascinating one, smashing genres together to create its own identity as a revenge feature that's more about the journey within than the squeeze of a trigger.   Read the rest at Blu-ray.com