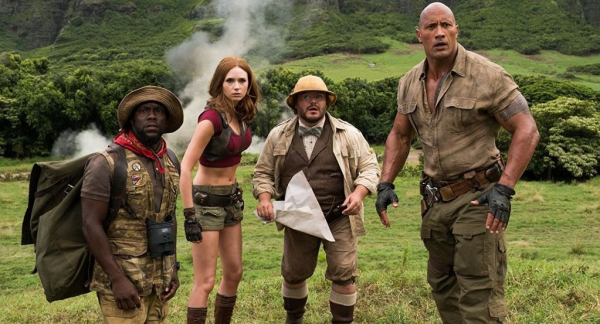 It was always strange that 1995’s “Jumanji” never received a sequel. Yes, there was 2005’s “Zathura,” which was more of a remake than a true follow-up, but a true continuation of the animal rampage antics never materialized. Now Dwayne Johnson has the urge to battle fantasy creatures, leading an eager cast for “Jumanji: Welcome to the Jungle,” which offers a few ties to the earlier picture, but mostly reheats the gameplay formula for a new generation. Director Jake Kasdan and the screenwriters (four in total) try to rework the central concept of panicked adventuring, giving the premise a video game setting, moving away from board games and suburban hellraising to make noise in the tropics. It’s an entertaining romp, wisely avoiding the burden of topping what’s come before, with Kasdan mindful of silly business and CGI chaos as he strives to remain true to character, offering as much personality as this type of extravaganza allows.  Read the rest at Blu-ray.com