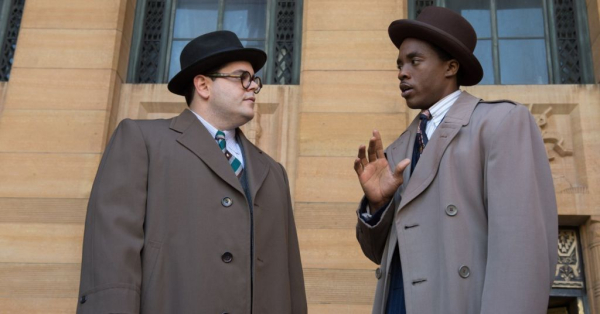 “Marshall” is not a bio-pic of the late Supreme Court Justice, Thurgood Marshall. Frankly, the film that bears his name isn’t even really about his career as a triumphant lawyer dealing with seemingly impossible cases steeped in prejudice. The Thurgood presented in the picture is more of an inspirational figure, handed defined attitude and authority as a black man trying to achieve justice in a white world. The screenplay by Jacob and Michael Koskoff (2015’s “Macbeth”) endeavors to transform Thurgood into a beacon of defiance, almost superhero-ish in design, gifting “Black Panther” star Chadwick Boseman a rare opportunity to play two men of action in his blossoming career. And he’s terrific in “Marshall,” handling the Koskoffs’ broad writing with care, making the most out of what becomes a supporting role in the feature, which probably wouldn’t welcome the same titular posture if it was called “Friedman.”  Read the rest at Blu-ray.com