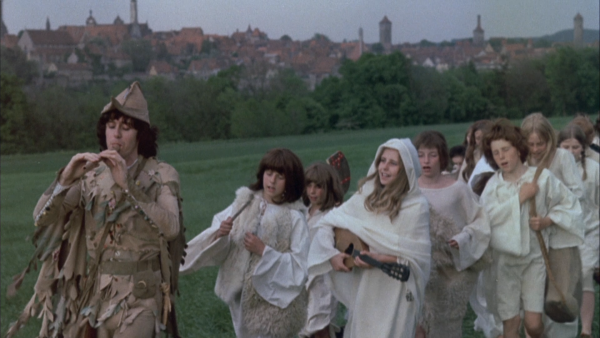 It's hard to fault "The Umbrellas of Cherbourg" director Jacques Demy for attempting his own take on the legend of the Pied Piper. And there's certainly a pronounced dark side to most fairy tales, providing a creative challenge. However, it's difficult to grasp what audience Demy is hoping to reach with this 1972 effort. "The Pied Piper" isn't truly for children, but the production has moments of broad behavior, and the casting of rock star Donovan in the titular role appears engineered to reach a young audience. But the rest of "The Pied Piper" is quite bleak, though fascinatingly staged by Demy who respects elements from the original tale, trying to remain as faithful as possible while arranging his own special black plague costume party.  Read the rest at Blu-ray.com