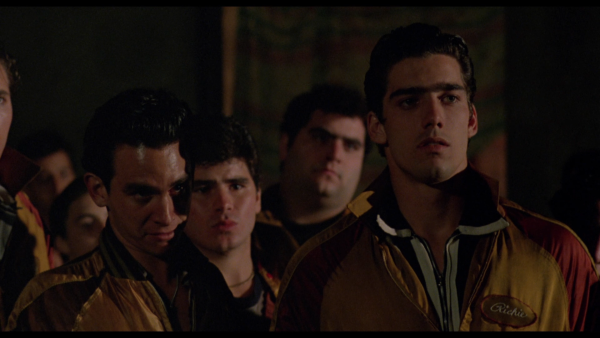 Embracing a newfound hunger for nostalgia, the 1970s provided an endless stream of retro entertainment, with specific emphasis on the celebration of the late 1950s to the early 1960s. The creative and financial triumph of George Lucas's "American Graffiti" and the longstanding ratings dominance of the T.V. show "Happy Days" created a demand for this type of storytelling, allowing something like 1979's "The Wanderers" to enter production. Based on a respected novel by Richard Price, the movie adaptation strives to deliver the same glow of memories and mischief as "American Graffiti," but provides the grit of The Bronx, its vivid setting, to help squelch any dewy depictions of adolescent life. "The Wanderers" hits a few sweet spots in period recreation, with co-writer/director Philip Kaufman unafraid to submerge the effort in pop music and era attire, but the picture isn't a cohesive endeavor. Kaufman masterminds a grab bag of incidents and emotions, delivering an episodic look at a time in American culture when cartoonish expressions of masculinity were about to be flattened by the harsh realities of the larger world. Read the rest at Blu-ray.com