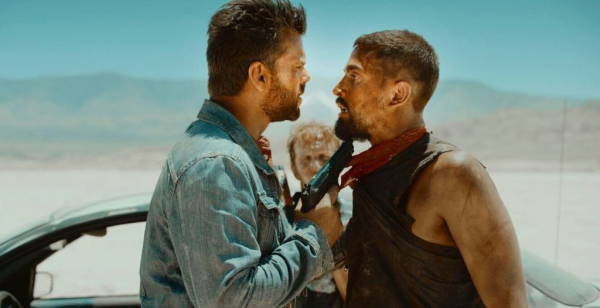 Co-writer/director Chris von Hoffmann attempts to replicate the Rob Zombie experience with “Drifter,” though it’s a futile quest, as Zombie is a singular weirdo with specific tastes in exploitation entertainment, backwoods horror, and gritty style. To try and mimic a formula that not even its creator understands seems foolish, but von Hoffmann doesn’t seems to mind, launching a moody chiller about travelers accidentally entering dangerous terrain, coming face to face with displays of highly theatrical madness. “Drifter” has style and attention to composition, but it never inspires a reaction to any of the horrors the production submits. It’s a dry bite of cannibalistic terror in a post-apocalyptic wasteland, and a film that feels like it lasts for three years, despite kinetic plot elements. The helmer tries to disturb his audience, but he’s better at putting them to sleep. Read the rest at Blu-ray.com