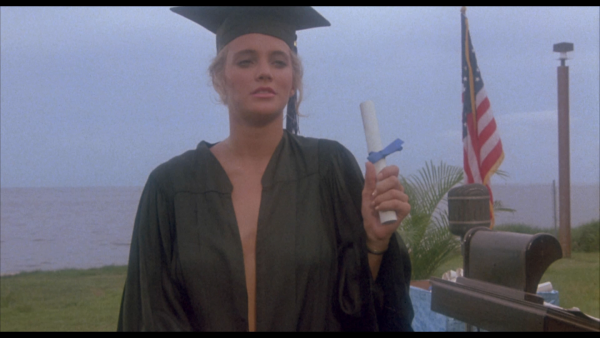 While 1983's "Porky's II: The Next Day" was banged out in a hurry to capitalize on the success of 1982's "Porky's," the box office results weren't worth the rush, with the sequel grossing less than half of the original's take. Profitable, sure, but hardly the type of audience response that supports a longstanding franchise. In an effort to lick the plate clean before moving on, the producers elected to give the series one last shot, waiting two years before creating "Porky's Revenge," which, tonally and dramatically, has more in common with the first picture than the dreadful second one. The Angel Beach High gang returns to duty for their third go-around, but the years haven't been kind to the kids, finding the whole production running on fumes as it halfheartedly arranges speeds of silliness and juvenile behavior, working to restore the impish highlights of the brand name without creator Bob Clark around to dilute shenanigans. "Porky's Revenge" isn't a good movie, but it manages to improve on the second chapter simply by respecting what audiences responded to in the first place. Read the rest at Blu-ray.com