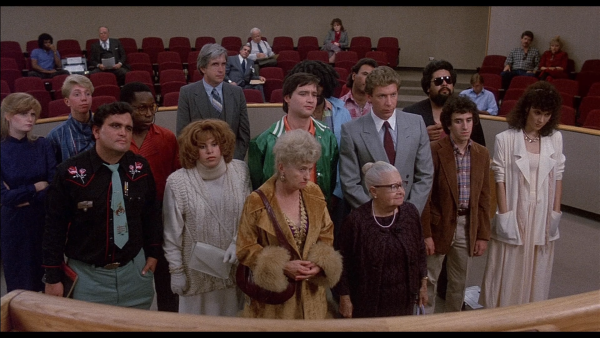 I suppose 1984's "Police Academy" is the gift that keeps on giving. While offering its own legion of sequels and television shows, the unexpected hit also spawned a series of imitators. And who better to rip off "Police Academy" than the men that co-wrote it. Enter Neal Israel and Pat Proft, who collaborate once again on 1985's "Moving Violations," reviving formula that pits the smart alecks versus police department squares, only here the emphasis is on the ways of driving school, with its tests of skill and memorization. After experiencing a degree of success with 1984's raunchy "Bachelor Party," Proft and Israel (who directs) go the PG-13 route, trying to find a balance between the comic architecture of their youth and the needs of a modern audience used to bawdy humor and dumb guy antics. To its credit, "Moving Violations" is never boring, always on the prowl for a sight gag or a one-liner, but the screenplay doesn't reach very far, remaining weirdly conventional when their previous efforts enjoyed a wilder sense of humor to help attract attention. Read the rest at Blu-ray.com