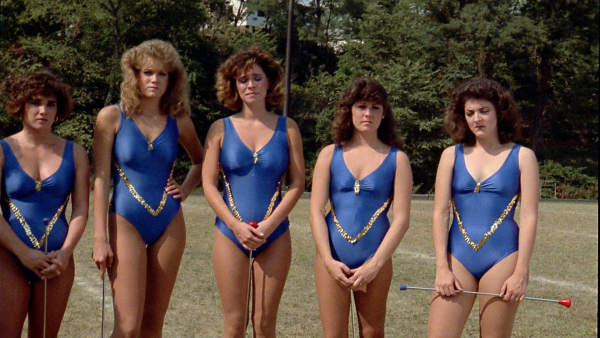 Usually slasher entertainment enjoys being slasher entertainment. It wears its blood, guts, and misogyny like a badge, proudly entering the world as a violent diversion for fans who appreciate the art of the scare and the visual power of masked madmen. 1987's "The Majorettes" almost seems embarrassed to be following slasher formula, eventually giving up the quest in the feature's third act to become a different style of B-movie mayhem. Perhaps this is an attempt to experiment with genre expectation, finding "Night of the Living Dead" collaborators Bill Hinzman (who directs) and John A. Russo (who scripts, adapting his own novel) ready to disturb expectations after fulfilling them for a solid hour of stalking and stabbing. "The Majorettes" isn't a trainwreck, but it's a highly flawed chiller with confusing structure, which helps to apply the brakes on a picture that rarely appears interested in creating a snowballing sense of terror. Read the rest at Blu-ray.com