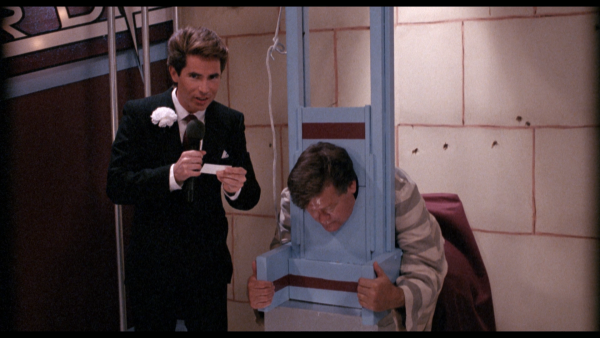 "Deathrow Gameshow" is the second film from 1987 to address a futureworld where the incarcerated are offered a chance at freedom if they compete on a popular television show. However, this isn't "The Running Man," which is admittedly a pretty goofy movie trying to keep a straight face. "Deathrow Gameshow" is a farce from writer/director Mark Pirro (and his Pirromont Pictures, which uses a mountain-esque image of a single female breast as their logo), who doesn't waste a minute on serious business, launching this take on the disposable lives of the condemned as a wacky exploration of television production and stupidity, without any sort of social or political commentary. It's a broad creation, but one that's eager to please, doing what it can to secure any laughs from viewers, trying to make a limited budget feel sizable with help from slapstick, nudity, and small bites of industry satire. Read the rest at Blu-ray.com