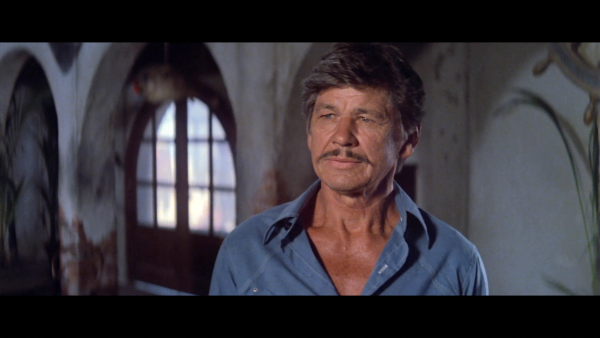 When one considers the possibilities of a "Casablanca" knockoff, especially one from 1980, a list of potential actors comes to mind for the Humphrey Bogart role. Men like Paul Newman and Robert Redford, maybe even Harrison Ford, who was fresh to fortune and glory at the time. But "Cabo Blanco" (the full title is apparently "Cabo Blanco…Where Legends are Born") doesn't go that route, electing to hire Charles Bronson for the role of a roguish charmer trying to manage the pains of love with the dangers of his community. It's an oddball casting choice, but "Cabo Blanco" doesn't meet many expectations, preferring to mix a "Casablanca" homage with a treasure hunt adventure, surrounding the star with an eclectic mix of prime talent and those relatively new to the English language. Expectedly, the movie fails to inspire anything approaching romance or excitement, but director J. Lee Thompson doesn't tank the effort on purpose, earnestly trying to craft a thrilling tale of mystery in an exotic locale, trusting the natural beauty of the land will be enough to cover for the feature's substantial deficiencies. Read the rest at Blu-ray.com