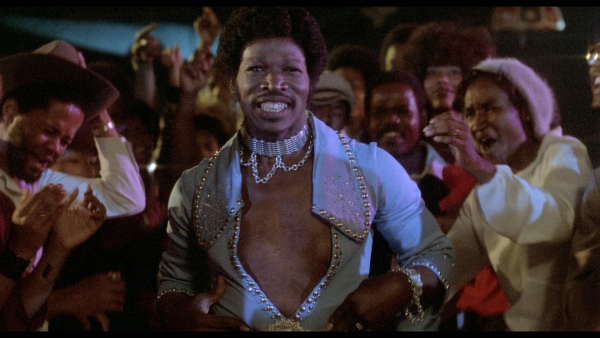 He pummeled bad guys and slayed paying audiences in "Dolemite," became a god of fury in "The Human Tornado," and battled Satan in "Petey Wheatstraw." But all it took was a healthy dose of sincerity to help bring star Rudy Ray Moore to his knees, at least professionally. Setting aside goofball antics for a moment, Moore turns his attention to the plight of the inner city in "Disco Godfather," which is dressed up in bedazzled jumpsuits, but really hopes to share with the audience a sobering look at the epidemic of PCP. Sure, some of Moore's cinematic interests are represented here, including half-speed martial arts, but the majority of the film is devoted to the evils of drugs and the fight to free those hopelessly addicted to angel dust. "Disco Godfather" basically promises one viewing experience and delivers another, which would normally be a clever switcheroo. However, this one gets away from Moore in a hurry, who unwisely restrains himself to fit the real-world hero tone. Read the rest at Blu-ray.com