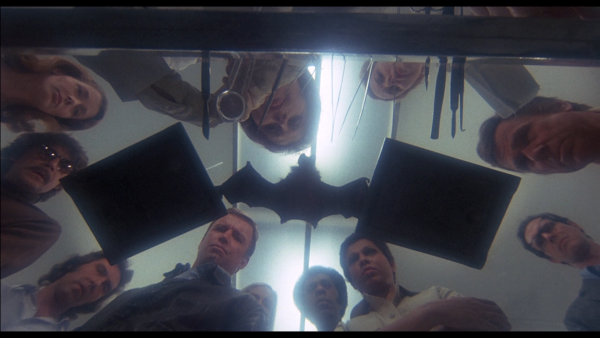 The 1970s was a gold mine for sci-fi/horror hybrids that played into the darkening sky ambiance of a nation experiencing a never-ending war and political deception. Paranoia was mixed with doomsday, permitting filmmakers to address world ills on a grand scale, delivering warning signs while still playing into genre demands for suspense and terror. "Chosen Survivors" is a prime example of apocalyptic concern, but instead of depicting the end of the world above ground, it plunges 1000 feet below, taking inspiration from other claustrophobic chillers. Director Sutton Roley and screenwriters H.B. Cross and Joe Reb Moffly have a terrific idea here, putting human behavior under the microscope as strangers are forced to rely on one another, building a new dawn as the world outside burns to the ground. And yet, "Chosen Survivors" doesn't end up a psychological study. It's a bat attack movie, setting aside provocative ideas on the status of humanity to focus on the wrath of flying mammals wiggling their way through tight spaces on the hunt for human blood. Read the rest a Blu-ray.com