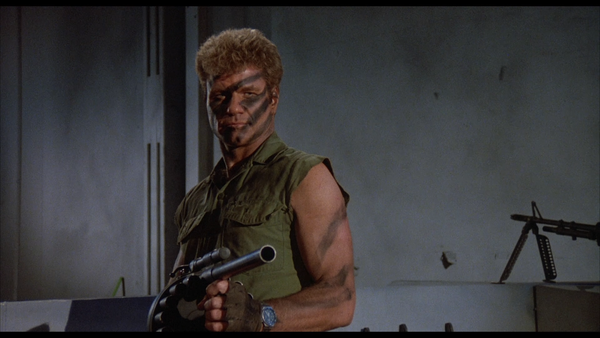 Just what does one do with Martin Kove? I'm sure this was a question Hollywood was wrestling with during the 1980s, trying to make sense of Kove's ascendance to screen villainy in "The Karate Kid," where the actor made a tremendous impression on audiences, fueling the film's masterful way with climatic payoff. But could he carry an entire endeavor with such intensity? After decades in television and supporting parts in features, 1987's "Steele Justice" was Kove's hour of power, gifted a Rambo-esque revenge thriller that offered the star a chance to emote, destroy, and snarl, trying to fit in with the decade's generation of action heroes. Kove is game, committed to his character and the production's vision for citywide violence, but "Steele Justice" is one incredibly goofy picture. A B-movie that doesn't make much time for logic, the effort crashes through cliché and absurdity, building up a rhythm of roughhousing that showcases Kove's masculinity and writer/director Robert Boris's imagination for mayhem. It's not good work, but it does work with lowered expectations.  Read the rest at Blu-ray.com