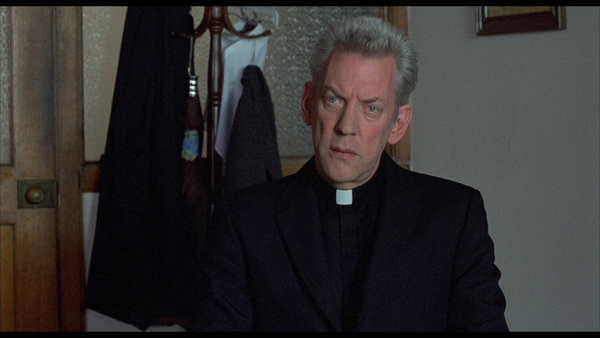 It's somewhat surprising that the Catholic Church would want anything to do with "The Rosary Murders," with production access to churches repaid with a strangely condemning screenplay that depicts holy leaders as dim, corrupt figures bound by absurd organizational laws. However, general disapproval of religious practices and leadership is the least of the 1987 picture's problems, finding its approach to big screen mystery strangely lethargic, taking an uneventful route when detailing a serial killer's rampage across Detroit. "The Rosary Murders" has the tools to generate passable thrills with a decent whodunit, but director Fred Walton ("April Fool's Day," "When a Stranger Calls") doesn't provide the energy needed to bring the story to life. Much of the movie is put in star Donald Sutherland's hands, tasked with maintaining emotional depth and procedural surprise. The actor is good here, at least restless enough to keep the viewing experience from slipping into a coma, but he's no miracle worker. Read the rest at Blu-ray.com