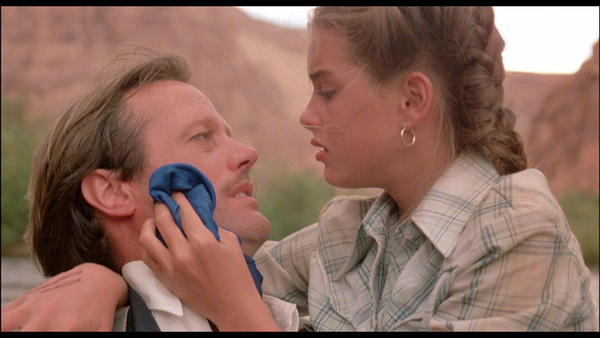 The early career of Brooke Shields is proof that the 1970s weren't really a decade, but an extended stay inside an alternate dimension. How else does one explain global comfort with the profound sexualization of the young teenage actress, who built a career out of roles that dealt uncomfortably with her age and appeal to older men. Granted, Team Shields (including manager and mother Teri) was largely responsible for the tone of her fame, yet with films such as "Pretty Baby" and "The Blue Lagoon" (a 1980 production that plays very seventies), the public wasn't protesting, creating a lusty icon out of the child. 1979's "Wanda Nevada" is another example of Shields employed for her natural beauty, portraying a 13 year old who's turned into a commodity while bewitching every creeper she meets. Director Peter Fonda (who also stars) makes an attempt to transform "Wanda Nevada" into a sassy adventure through the southwest, with secret maps and Native American mysticism, but awkwardness remains, especially when the story actively pursues a romantic entanglement between a pubescent teen and her 39-year-old owner. Read the rest at Blu-ray.com