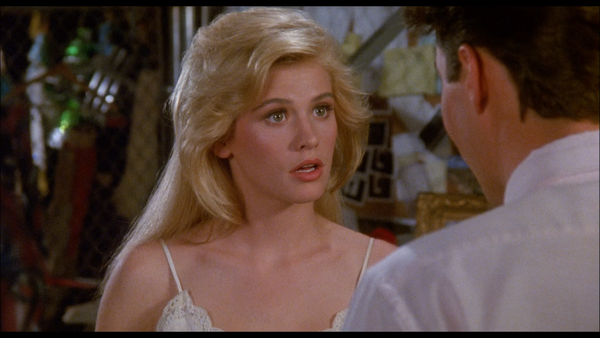 When "Mannequin" debuted in 1987, little was expected of the romantic comedy. Leading with the charms of stars Andrew McCarthy and Kim Cattrall, and riding on the wave of a hit theme song in Starship's "Nothing's Gonna Stop Us Now," the feature managed to beat the competition and becoming one of the top-grossing pictures of the year. Of course a sequel was going to happen, but just how could there be a second chapter to the story of a window dresser falling in love with his enchanted mannequin? Well, there isn't one. Instead of expanding the original saga, the producers go the remake route, simply reviving the original plot with a new pair of lovers, only investing in the return of Meshach Taylor as Hollywood Montrose, who revives his flamboyant ways to act as the bridge between the movies. 1991's "Mannequin Two: On the Move" (titled simply "Mannequin: On the Move" during the main titles) is a production that certainly isn't difficult to understand from a financial point of view, but creatively, it's a mess, shamelessly rehashing the original film with a new round of magic, montages, and cartoon villainy. Read the rest at Blu-ray.com