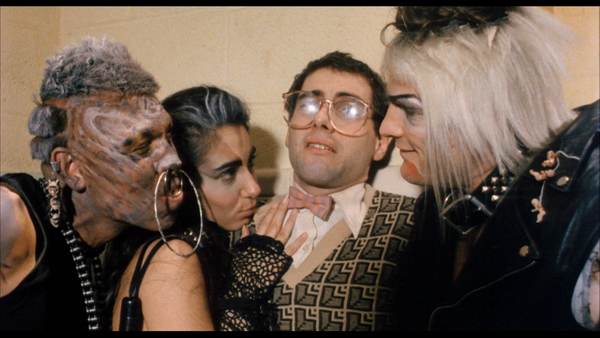 Attempting to outwit and outrun their 1984 cult hit, "The Toxic Avenger," co-directors Richard W. Haines and Lloyd Kaufman (billed here as "Samuel Weil") return to the dregs of humanity with 1986's "Class of Nuke 'Em High," which turns out to be the next logical step of splatter stupidity for Troma Entertainment. Instead of defining the origin story of a reluctant superhero, the production settles on absolute chaos, braiding a tribute to teen cinema of the 1950s with a gore zone spectacle of the 1980s. It's wild work, exploring a premise with surprising potential, but like most Troma endeavors, it doesn't know when to quit, gradually working from a cheeky serving of carnage to noisy bedlam, losing a balance between creepy and silly that aids digestion of the feature's first two acts. "Class of Nuke 'Em High" is only fun in the build-up to pandemonium, not when the effort finally reaches its orgy of graphic violence and aggressive slapstick, making the climax strangely anticlimactic. Read the rest at Blu-ray.com