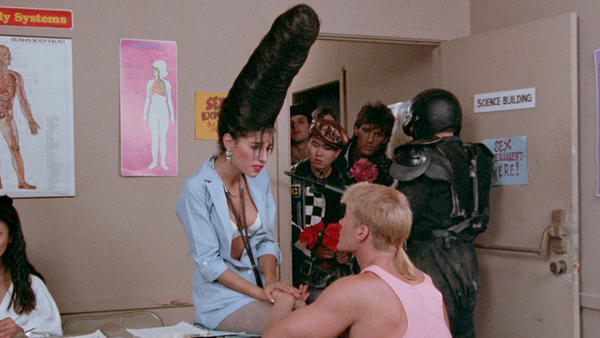 Instead of following up 1986's "Class of Nuke 'Em High" with a straightforward sequel, Troma Entertainment reworks the premise to fit a new generation of radiated bedlam, stomping into a new decade with 1991's "Class of Nuke 'Em High 2: Subhumanoid Meltdown." It's actually surprising to see the sequel disregard its predecessor to this degree, with director Eric Louzil determined to make the follow-up his own, doing away with high school antics to concentrate on more monster-based mayhem. Keeping the Troma sense of humor, "Subhumanoid Meltdown" also pays tribute to the company's addiction to incoherence, with most of the feature a grab bag of ideas, gore zone visits, and topless actresses, with Louzil obviously overwhelmed by the demands of a low-budget comedic shocker. Its manic spirit is overwhelming, but there are choice moments of Z-grade insanity to feast on, with the continuation/remake abandoning storytelling to make a self-aware mess, and one that's fun in small doses. Read the rest at Blu-ray.com